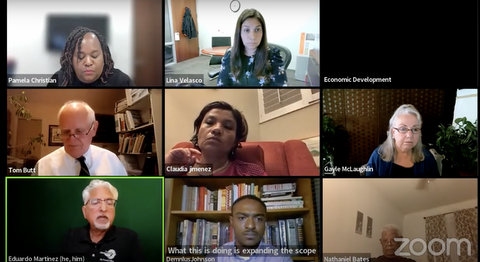 The Richmond City Council discussed Tuesday how the city would use money from the federal government earmarked for unhoused residents. (Screenshot captured by Julia Métraux / Richmond Pulse)

The Richmond City Council voted Tuesday to allow $50,000 in American Rescue Plan Act funds for Rydin Road encampment residents to be expanded for uses other than repairing vehicles, such as buying flights for people with family members who can take them in. Mayor Tom Butt and council member Nathaniel Bates voted against this motion.

This motion was meant only to expand the terms of what the funding can be used for. But conversations ensued among members of the City Council and Richmond residents about whether unhoused people should be given these funds and whether there should be requirements, such as being forced to leave Rydin Road as soon as possible.

“There is agreement amongst the residents that an equitable manner of distributing the funds would be to divide it equally amongst the 25 people, no matter the usage,” Lina Velasco, the city of Richmond’s director of community development, said of Rydin’s 25 current residents.

Velasco said the money would also be used to refund people for repairs they have already made to their vehicles.

At some point in the fall, the city of Richmond should have a sunset date for the Rydin Road encampment, which is why council member Gayle McLaughlin said this funding is important.

“People understand that there is going to be a sunset date coming up in the fall and in the meantime, this item will give staff an opportunity to engage with the residents find out what their needs are, get them ready to take the next step in their life,” she said.

Vice Mayor Eduardo Martinez, who brought the motion forward, said it is important that the city works with people at Rydin Road to create solutions.

“We need to work together,” Martinez said. “It doesn’t help anyone to be constantly fighting each other over $50,000.”

Despite the funding already being designated from ARPA, Bates said that he is distrustful of how the funds will be distributed.

“I don’t trust the staff to implement what this council is about to do,” Bates said.

Butt also said there should be a “quid pro quo” that Rydin Road residents should never come back if they accept money to help them leave. Butt did not clarify whether he was talking about just Rydin Road or the city itself.

“We’re just handing out free money to people to do whatever they want,” Butt said.

Council member Demnlus Johnson asked staff if they had adequate support to help people in Rydin Road relocate. Velasco said that the city recently onboarded a housing manager and will have a new housing fellow as well.

“We would welcome the opportunity to have a council committee to engage with staff to look at how to allocate these additional dollars and what’s appropriate expenditure,” Velasco said.

During public comment, people who live on Rydin Road spoke about their frustrations with the process to receive funding and how unhoused people are perceived in general.

“Nobody likes down here like living like this,” said Amanda Jenkins, who said she has two jobs. “It ain’t about not working or being too lazy. It’s about we can’t freakin’ afford to live out here.”

Eli Moore, the director of the community power and policy partnerships program at the Othering & Belonging Institute at UC Berkeley, criticized what he perceived as “fear-mongering” about unhoused people during open comment.

“Blaming people for their terrible situation as a way to try to win some political power is depriving people,” Moore said. “I think absolutely funds should be distributed straight to people to meet their needs based on what they identify as the best solution for them.”

Before the vote, council member Melvin Willis criticized some members of the City Council for their comments about people living at Rydin Road and about unhoused people in general.

“Folks in Rydin Road are facing the degrading comments that do come from certain members of council,” he said. “I apologize that it’s triggering that trauma, also rubbing sore wounds.”