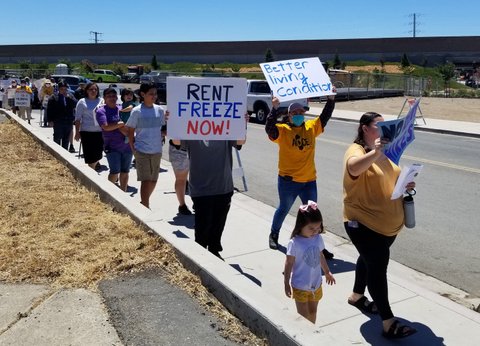 The Antioch City Council is expected Tuesday to finalize a rent stabilization ordinance keeping unethical landlords in check while keeping rent affordable for residents still affected by the pandemic recovery.

More than two dozen people spoke at the July 23 council meeting, after which the council signaled its willingness to craft an ordinance.

Activists say about 150 people were given rent increase notices at both properties, and many could end up homeless.

Several people asked the council for an emergency ordinance freezing rent increases and a moratorium on evictions. Which the council said it couldn’t do, as Antioch — unlike charter cities like Oakland, Berkeley and Richmond — is a general law city without the same flexibly to enforce rent moratoriums without the state’s backing.

A staff report for Tuesday’s meeting leaves open the exact number at which the council might decide to cap rent increases, as a percentage of the Consumer Price Index for All Urban Consumers in the San Francisco-Oakland-Hayward Area, published by the Bureau of Labor Statistics.

The proposed ordinance would allow one rent increase over 12 months within the capped percentage on which the council decides.

The report uses examples of similar ordinances in California general law cities, all of which use the CPI as a gauge for their own caps, ranging anywhere from 5% of CPI or 80% of CPI up to 10%.

The report explains the need for rent stabilization in Antioch, calling it a public health threat.

“The increased cost burdens of rent and increased risk of displacement and overcrowding faced by many residents in the city threaten public health, safety, and welfare,” the report says. “Many City residents are struggling to pay for rent, food, clothing, and medical care for themselves and their families. “The specter of eviction and increased homelessness for inability to pay rent looms as a further threat to public health, safety, and welfare in the city.”

Antioch has 49,236 employed residents, two-thirds of whom earn less than $50,000 per year, according to the city. Household income disparity is even more prevalent for Antioch seniors, 41.2% of whom are people of color “who often live on fixed incomes and are more likely to have disabilities, chronic health conditions, and/or reduced mobility,” the staff report says.

The largest proportion of senior households who rent are extremely low-income, and approximately 40% of Antioch’s large family households are “cost burdened,” almost half of which are “severely cost burdened,” meaning the households pay more than half of their income on housing,” according to the report.

The ordinance would also allow tenants to recover damages from landlords and allow criminal prosecution of those not in compliance.

The Antioch City Council meets at 7 p.m. Tuesday at the council chambers at 200 H Street in Antioch. The meeting can be seen at www.antiochca.gov.