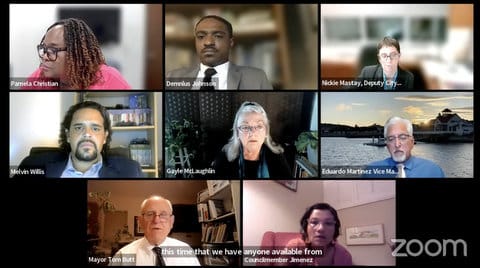 YouthWORKS helps hundreds of Richmond youth, between the ages of 16 and 24, gain relevant work experience in the summer and access to other opportunities during the academic year.

One issue: Only a few staff members support the expansive work that YouthWORKS does.

“A large number of Richmond youth were placed in a variety of employment settings, but unfortunately there were only two staff members that have been trying to manage a caseload of more than 250 youth participants,” Deborah Small, who is part of the Reimagining Public Safety Community Task Force, told the City Council on Tuesday.

Over the summer, young Richmond residents are placed in paid internships with a variety of local businesses, government agencies, community-based organizations and nonprofit agencies. Having only two staff members mainly supporting YouthWORKS is emblematic of a larger issue: the city trying to fill vacancies as some workers are stretched too thin.

“We have requested the support from a consultant to help us because it is a hard to fill position,” Taylor said. “We’ve recruited at least two rounds, and they were able to hire several people off of the list, but as you all know, there are more vacancies to be filled.”

Taylor also said the City Council would be kept informed.

“We are really acutely aware of the need, and we hope that we can pull this together,” she said.

“You took away our housing and left us truly homeless, on the street, with nothing replaced. No one’s checking in, and no one’s coming up with any answers,” Taran said. “I think that the community should know. All that needs to be done is give us a safe parking location.”

“I do believe that we need to be standing up for everyone’s public safety,” Barth said. “We can’t ‘sunset’ our everyday responses.”

Council Meetings No Place for Campaigning

The upcoming Nov. 8 election dominated the public comment segment. Mark Wassberg, who is running for mayor, claimed current Mayor Tom Butt is similar to Adolf Hitler and Benito Mussolini for not allowing him to campaign during public comment. Another speaker raised concerns that the founder of an organization that has a contract with the city, Urban Tilth, is running for City Council.

“Speakers may not campaign for or against candidates for office,” Butt said, repeating rules for meetings.

Butt said people are still allowed to talk about issues regarding people running for office, as long as it does not speak for or against their campaign.

The deadline to register to vote for the Nov. 8 election is Oct. 24.