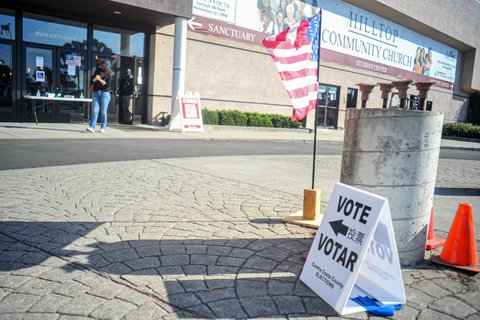 With the majority of votes still left to count, Richmond Progressive Alliance candidates took the lead in all three races for Richmond City Council on Tuesday, according to the first report from the Contra Costa County Elections Department.

The results are pulled almost entirely from mail-in ballots, and most of those still need to be processed. Final election results will likely only be known near the end of November, once all ballots are counted.

In total, the first election report includes 20,871 votes from Richmond residents, 35.76% of the registered voter count for the city. As a whole, it captures 41.38% of the county’s roughly 700,000 registered voters.

Former Richmond Mayor Gayle McLaughlin leads in the District 5 council race, earning slightly under 50% of votes counted so far. Current council member Melvin Willis received over 53% of votes so far in his area, putting him in the lead for District 1. And Claudia Jimenez, in the District 6 race, acquired about 48% of currently counted votes.

For Measure U, which would change Richmond’s current business license tax to instead be based on gross receipts, about 70% of ballots counted voted in support. More than 20,870 votes have been counted so far on the tax — or about 36% of the 58,362 registered voters in the city. Measure X, a Contra Costa County half-cent sales tax for the next 20 years that’s anticipated to raise about $80 million annually, has gained about 56.% of the vote.