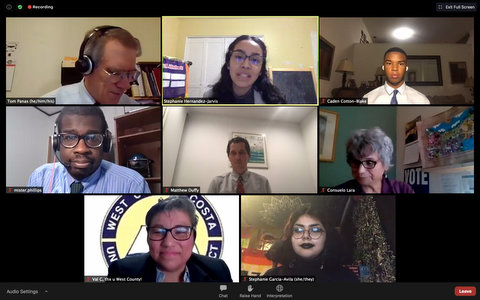 On Wednesday, the West Contra Costa Board of Education approved a rebuilding plan for Lake Elementary School that focuses on creating a flexible learning environment.

Lake Elementary, located in San Pablo, was constructed in the 1950s and 1960s, and the systems inside the buildings are well past their useful life, according to the district’s Lake Rebuild Educational Specifications. The school was identified for a full replacement through the district’s 2016 Long Range Facility Master Plan, and the new building is sized to accommodate 470 students.

Goals for the rebuild include creating the flexible learning environment, simplifying the traffic approach to the campus and maximizing capacity. The flexible design essentially means that rooms are built to be adaptable to different layouts and uses, and that there are more styles of classroom available. According to the educational specifications, this allows for variation and movement between activities that break the restraints of traditional classrooms.

“Flexibility and adaptability are a requirement for 21st-century school design because the types of activities students perform change daily and the curriculum is adjusted for students’ passions,” the document says.

Much of this flexibility takes place in “flexible learning suites,” which could include components such as project rooms, suite libraries, large and small group areas, individual study spaces and student cubbies.

The Michelle Obama Elementary School, which held a virtual grand opening last month, is an example of a school designed around flexible learning. Located in Richmond, it was the first flexible learning school built in the Bay Area, according to principal Claudia Velez. She said, in the livestreamed reopening video, that the buildings of the school are designed to give students room to explore their unique interests and skills.

The board voted 4-1 to approve the Lake Elementary rebuilding plan, with board member Tom Panas opposing. Panas said he was uncomfortable approving a new school design that the district hasn’t tested and isn’t proven to improve student outcomes.

“This is Lake’s one swing at a new facility — they won’t get a second chance — so it’s key that we really understand what we’re doing here,” Panas said. “I just consider it extraordinarily risky to invest in this school design without proof that it actually improves student outcomes.”

The rest of the board and public commenters were supportive of the plan. San Pablo Mayor Arturo Cruz said the San Pablo City Council had sent a letter of support for the rebuild, which he said would also create many jobs and help the local economy.

Board member Mister Phillips asked a series of questions about the kind of instruction and training school staff would need to properly use the space to Lake Elementary principal Kenneth Bonner. He said the questions were similar to ones he asked Velez, the principal of the Michelle Obama school.

Bonner said school staff is committed to the challenge, and they have the benefit of having time to train and prepare for the flexible environment.

Phillips also asked district staff to elaborate on what commitment they would give to the school so that the flexible learning model can be best utilized.

Superintendent Matthew Duffy said the district would go through the same process with Lake Elementary staff as it had with staff from Michelle Obama Elementary. The process included sending members of the school staff to see models of the schools, bringing guest speakers, and a fellowship for the principal and assistant principal to visit different schools.

Phillips said he was asking these questions because approving the design was “kind of like buying a fast car and not getting any training on how to drive fast.” Because the school isn’t traditional, he said, the training is highly important.

“The Lake community is going to have to get support to be able to pull this off in a way that’s best for the children,” Phillips said.