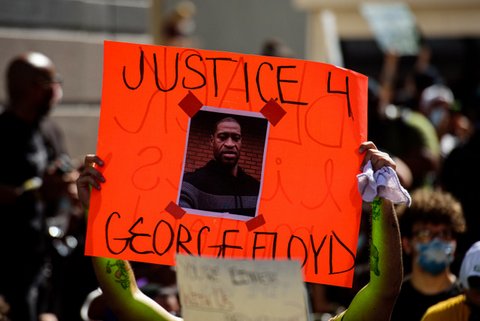 25 May Commentary: One Year Later – The Death of George Floyd and a Racial Reckoning in America

Posted at 11:09h in Commentary by Danielle Parenteau-Decker 0 Comments

Editor’s Note: Tara Lynn Gray was recently appointed to the Newsom administration as the small business advocate. In this op-ed, she is speaking for herself and not on behalf of the administration.

Reflecting on the murder of George Floyd a year later requires that we as Black Americans, Americans as a nation, honestly look at all the meaning that this tragedy embodies. The symbolism is palpable. For life has been, and continues to be, snuffed out of Black Americans in many ways, on many fronts.

Many people across the nation and around the world watched in horror the film footage of veteran police officer Derek Chauvin pressing the life out of George Floyd with that defiant, inhumane stare as he pushed his knee against Floyd’s neck with utter disregard for what — we learned during the trial a year later — lasted nine minutes and 29 seconds, long after life had left George Floyd’s body. Chauvin was so enraged he kept killing Floyd long after he was already dead. He showed no concern about the potential consequences of his action as alarmed and pleading citizens stood by, eyewitnesses, watching helplessly.

Today, some may have found a bit of justice with the recent murder conviction of Derek Chauvin. But what does that really mean? What does it mean when it comes to achieving real justice for the known and unknown number of wrongful deaths of Black men and women by the hands of policemen and other law enforcement officers? The real question, and more important, what will be done to bring about systemic changes to stop this age-old, generation-old practice of snuffing out the life, literally and figuratively, of Black men and Black people in many aspects of American life?

Blacks in America have had knees on their necks in all strands of the American experience, not just in terms of police brutality. American history is replete with evidence of oppression and inequality when it comes to how Blacks are regarded and treated. For decades and across generations, first it was slavery, then Jim Crow and now, the seemingly endless fight for civil rights and voting rights. In addition to police brutality today, too many states have introduced laws to restrict voting, with the state of Georgia leading the way. Many, not just rogue policemen, are about the business of snuffing out the will and denying those privileges and opportunities to Blacks that are afforded to other Americans.

These egregious practices can be seen in education, employment and business — whether it is business in a large corporate environment or in the small business sector that is the bedrock of America. Despite their value, their quality, their contribution, Black employees and Black businesses are all too often under-valued, under-supported and lack adequate investment capital. If they barely can survive today, how can they expect to participate in the technological advances and become sustainable in the future?

As we look at all the facets of what happened to George Floyd and so many others, and what their lives and deaths truly represent, caring Americans must focus on the mistreatment of Blacks, the ravages and denial of Black progress historically and now, across all areas of American society that breed a disproportionate level of poverty, crime, injustice and unequal opportunity. America must acknowledge and value what Blacks bring to the table.

For those of us Blacks who have first-hand experience with rogue policemen, an unequal educational system, a discriminating employer who persists in treating you unfairly no matter how excellent your work history has been, or as a small business owner that struggles to survive year after year, there is more to be done and more to endure.

This is a call to action to our communities, our state and our nation to realize that the death of George Flood and others is only symptomatic of larger systemic problems that need to be fixed. America will never be all it can be until it does.