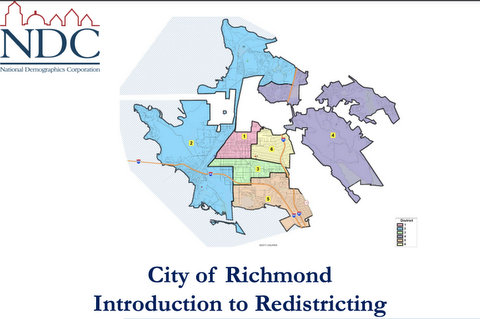 As Richmond begins the process of redrawing voting districts, some on the City Council argue at-large elections are needed to hold members accountable to the entire city. (Screenshot captured by Mathew Miranda / Richmond Pulse)

The Richmond City Council on Tuesday held its first of four public hearings to reestablish district boundaries based on 2020 census data and raised the possibility of returning to at-large elections.

Last year, Richmond joined the dozens of cities across California that have switched to a district voting system based on claims that at-large elections are racially biased and violate the California Voting Rights Act of 2001. At large-elections are determined by citywide popular vote, while district elections split the city into separate regions where voters select a council member from their area. Richmond is split into six regions, with one council member representing each region. The mayor is still elected at-large.

Every 10 years, cities must redraw district lines based on the most recent census data to reflect how local populations change. Due to delays caused by the COVID-19 pandemic, the 2020 census count will be released around Sept. 28. The new district boundaries must be adopted by April 17, 2022.

Shalice Tilton, a senior consultant for National Demographics Corporation — who was contracted to help with the mapping process — explained the redistricting process and encouraged residents to provide input.

“We want to hear from the community what defines your neighborhood,” Tilton said.

Mayor Tom Butt raised a question to city staff about returning to at-large elections. Butt referenced the city of Santa Monica, which has been battling a California Voting Rights Act of 2001 lawsuit and will be going to the California Supreme Court for a final decision.

“A lot of people are very disappointed with how this district election thing worked out,” Butt said. “And this might be the prudent thing to do.”

City staff said the voting system could be “walked back,” but “not necessarily advisable.” Staff will return with more information at a later council meeting.

According to Tilton, the Santa Monica decision could take “years as opposed to months,” which would result in Richmond possibly not meeting the deadline if they chose to battle the lawsuit.

“Richmond was already divided and segregated, just based on culture alone and district elections only made that worse,” Willis said. “And I don’t like the idea of council members only feeling accountable to the people in their district.”

Bates said Richmond’s minority districts are difficult to divide because there are no specific areas where these populations live. He also said that with district elections, the representatives from each region may prioritize their area which should not be done when elected to the council.

“When you’re elected by the entire city, there’s a responsibility that extends beyond where you live,” Bates said.

The city has created a web page with further information and related documents on the redistricting process. Residents will also be able to use this web page to access mapping tools and draft their own district boundaries. One of the mapping tools is available in six languages: Spanish, English, Portuguese, Vietnamese, Mandarin and Korean.

Council members Gayle McLaughlin and Claudia Jimenez pushed for all the mapping tools and online documents to be available in additional languages such as Chinese and Lao.

The next public hearing is scheduled for Sept. 14 during the City Council meeting.