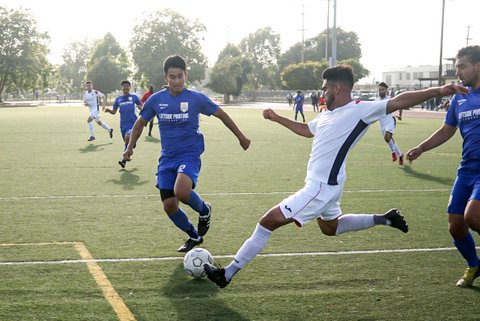 Posted at 12:15h in News, Sports by Danielle Parenteau-Decker 0 Comments

Story and photo by Denis Perez-Bravo

“We were more hungry. We were first place for a reason,” San Pablo midfielder Juan Alejandre Jr. said.

SPFC ended the first half of the game greatly surpassing Richmond Sol in goal opportunities.

“We know we need to put away teams like we did in the second half,” Alejandre Jr. said.

In the second half, San Pablo continued controlling the game and scored three goals, all of them through set plays.

The first goal came in the 54th minute when Alejandre Jr. took a free kick on the right side of the field. He crossed a ball into the goal box and made no contact with any player. The ball then bounced over Richmond Sol goalie Salvador Rodriguez.

San Pablo kept up the momentum and scored five minutes later as Kevin Sanchez crossed a ball into the box off a free kick on the left side and San Pablo forward Pedro Hernandez jumped and headed the ball to the right side of the goal, beating Rodriguez.

In the 78th minute, a penalty was called against Richmond Sol, and Alejandre Jr. put the ball into the back of the net.

Throughout the season, set plays did not produce many goals, he said.

“We needed to get better on the set plays, and we were getting scored on set plays. That is why we practiced that,” Alejandre said. “It paid off.”

San Pablo moves on to play Atlético East Bay, the second seed in the league.

San Pablo was seeded first because of its goal tally. Atlético scored 41 goals and allowed 16, while San Pablo scored 42 and allowed only eight.

“But every game is different. We are not going in confident. Whoever plays their best is going to win,” Alejandre said.

San Pablo FC and Atlético East Bay will face off at Burrell Field in San Leandro on Saturday at 7 p.m.