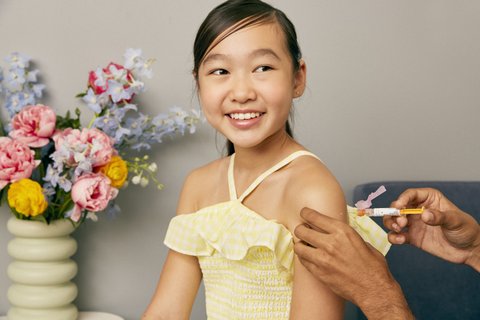 Posted at 13:32h in COVID-19, Health by Danielle Parenteau-Decker 0 Comments

(“Young girl about to receive a vaccine” by Heather Hazzan for Self Magazine, under CC BY 2.0 license.)

By Ana B. Ibarra, CalMatters

U.S. gave final approval Tuesday for children ages 5 to 11. In some California counties, they can be vaccinated as soon as today.

California will begin vaccinating young children as soon as Wednesday, with the state expecting to receive more than a million doses of COVID-19 vaccine during the first week.

The U.S. Food and Drug Administration last week authorized Pfizer’s vaccine for children ages 5 to 11 for emergency use. On Tuesday, the Centers for Disease Control and Prevention also endorsed it.

Some states began offering vaccines to kids that same night.

In California, vaccinations for this age group were expected to become available after a review by the Western States Scientific Safety Review Workgroup, which is made up of public health experts from California, Nevada, Oregon and Washington. However, some counties, including Santa Clara, have already announced they will begin vaccinating kids Wednesday. Long Beach will start offering them at its clinics Friday.

California is home to 3.5 million children ages 5 to 11, about 9% of the state’s population. State health officials said they expect to receive 1.2 million doses within the first week of distribution, and some counties reported receiving shipments Tuesday.

Health care providers say that distribution should go smoothly, after almost 11 months of practice with adults. But some doctors expect to ramp up their education efforts for concerned parents.

Pediatricians told CalMatters that they have been hearing from concerned parents who in some cases, despite having received the shot themselves, have doubts about vaccinating their own children.

“As parents, we tend to be more on the careful side, which is perfectly fine, but if a parent has fear or has doubts and hasn’t found a place to ask questions, that’s where we can lose traction,” said Dr. Ilan Shapiro, a pediatrician and medical director for the AltaMed health system in Southern California.

Dr. Charles Golden, medical director at Children’s Health of Orange County, said he reminds parents that “this vaccine has gone through rigorous trials and reviews.”

“I’d recommend having children vaccinated sooner than later. Community transmission is lower but still substantial, and risk will increase with the holidays and back to school activities,” Golden said.

Teens in California started getting vaccinated in the spring and so far about 60% of 12 to 17 year olds have been fully vaccinated — a lower rate than in any adult age group. That, however, is expected to increase with incoming coronavirus vaccine mandates in schools.

>>>Read: Why I Got Vaccinated: It Was a No-Brainer

Here are answers to some key questions about the coronavirus in kids and the newly approved pediatric doses.

Where will doses be available? How should parents make appointments?

The best place to start is with a child’s primary provider, pediatricians say.

“As far as when appointments can start being made, we’re waiting to hear from the county, but as soon as we hear them, patients can start calling their pediatrician’s office,” said Golden.

Parents also will be able to look for appointments and locations at MyTurn.ca.gov, although it’s unclear when.

What does a COVID-19 infection look like in kids?

Symptoms in young children can be similar to those in adults: sore throat, fever and shortness of breath. While severe illness and hospitalization are less common among children, an infection could still potentially cause pneumonia and progress to requiring intensive care or a ventilator, said Dr. Dean Blumberg, chief of pediatric infectious diseases at UC Davis Children’s Hospital.

Some pediatric COVID-19 cases can cause multisystem inflammatory syndrome, which occurs about two to four weeks after infection, Blumberg said. Inflammation occurs throughout the body, including in organs, and could lead to heart failure. Symptoms include stomach pain, low blood pressure and vomiting. As of Nov. 1, the state has recorded 690 cases of this syndrome.

If the risk of severe COVID is lower in children, why do they need the vaccine?

“The risk in children is lower than adults, but that doesn’t mean there is no risk,” Blumberg said.

As of Nov. 3, more than 1.9 million cases have occurred nationally among 5 to 11 year olds, according to CDC data. Cases and hospitalizations increased among kids as the more contagious Delta variant gained dominance.

California has tallied more than 686,000 cases in teens and children 17 and under — about 15% of all cases. Thirty-seven minors have died.

A more local look: At Children’s Health of Orange County, roughly 6,000 minors have tested positive for COVID-19 and more than 600 of them have required hospitalization, Golden said. About a third of those children wound up in the ICU.  “No, this isn’t the same number as adults, but kids do get critically ill too,” he said.

State health officials also note that vaccination among young children is important to help reduce community spread of the virus.

How big are the doses and how effective are they?

Children will need two doses of the vaccine, three weeks apart. Each dose is a third of what is given to people 12 and older.

Pfizer’s pediatric vaccine has shown to be 91% effective in protecting young children against COVID-19.

What about myocarditis? Do the benefits of the vaccine outweigh the risks?

A recent CDC study found that the risk of myocarditis among people infected with the virus was 16 times higher than in people without infection.

Myocarditis is most prevalent in male teens and young adults under 30, but less common in younger children, according to the CDC.

Agency officials and advisors say myocarditis is rare and that the vast majority of people who did experience heart inflammation after vaccination recovered.

The CDC has confirmed 1,005 reports of myocarditis or pericarditis (inflammation of the outer layer of the heart) after vaccination, and is investigating whether these cases are directly related to the vaccine. On Tuesday, agency officials said there have been no deaths in teens who developed myocarditis after the vaccine.

Part of the job of the CDC and FDA is to conduct several risk-benefit calculations for vaccinations. Pediatricians say the agencies’ approval means they have found overwhelmingly more pros than cons to vaccinating children.

Will the vaccine for kids produce side effects like in adults?

Pediatricians expect side effects, such as sore arms, fatigue and low-grade fever, to be similar to those seen in older groups. However, the doses and needles are smaller, so some effects may be milder among children.

Shapiro recommends that parents be honest with children who may be afraid of needles or scared of potential side effects. “I think it’s important to acknowledge that it can hurt and that it’s OK to be scared,” he said.

Will there be boosters or is this a one-and-done for kids?

It’s too soon to know.

“We’re just learning about the long-term protection that one gets from COVID vaccines,” Blumberg said. “It appears that soon after being fully immunized, the vaccine protects very well. After a while, the immunity for mild infection wears off, but there still appears to be prolonged protections against serious infection.”

At that point, it might become a question of how much do we want to prevent mild, breakthrough infections, he said.

With vaccine mandates at schools, is there an exemption process?

At the state level, that process has not been worked out. For now it’ll be up to individual school districts who are implementing their own mandates.

Blumberg said he has already received inquiries from parents about opting out of school mandates for the COVID-19 vaccine.

Last month, Gov. Gavin Newsom announced that the state will require coronavirus vaccines for in-person instruction once the vaccines for minors have received full approval, not just emergency authorization.

Some school districts, including Los Angeles Unified and Oakland Unified, have said they’ll require vaccination for kids 12 and older starting in January. A spokesperson for Oakland Unified said its requirement will not automatically extend to children 5 to 11. Instead, if the district’s board of education chooses to require it for younger kids, it’ll have to pass a separate resolution.

School districts will each have their own forms for parents to fill out to obtain exemptions.

“The state has a very well-organized process for opting out of the other vaccines that are currently mandated for schools through the immunization registry, but for this vaccine, which individual schools are requiring, I’m not sure you can do the exemption through the registry,” Blumberg said.

How will the state ensure equitable distribution of the vaccine among Black, Latino and low-income communities?

Concerns about vaccine disparities are legitimate, Shapiro said. Just like in adults, kids in these communities are more likely to face barriers such as their parents’ inability to take time off work and a lack of transportation. But children also generally visit the doctor more routinely, so there will be opportunities for vaccine education, Shapiro said.

“I think most people in the community know this is coming and that we need to talk about it,” he said. “I’ve had families come in where the mother had a question and the daughter already knew the answer. Kids are listening. They’re interested too.”

State health department said they are working to ensure that kids’ vaccines are available in a variety of settings, including doctors’ offices, pharmacies and schools. In a statement, the department said one key difference from the early days of the vaccine effort is that now there are many more providers enrolled to administer them.

This story was originally published Nov. 3, 2021, by CalMatters. It has been reproduced with permission.