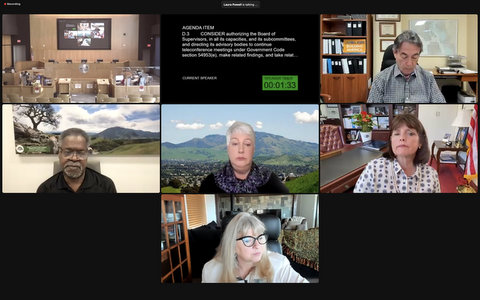 The Board of Supervisors meeting Tuesday was focused on public health. (Screenshot captured by Richard Tzul / Richmond Pulse)

The Contra Costa County Board of Supervisors deliberated over matters related to county public health Tuesday, namely additional funding for a healthcare program, a new health officer and the mask mandate.

During the meeting, county Health Services Director Anna Roth outlined the goals of the CARES program. The service offers health coverage for lower-income uninsured residents who are 19 or older.

The program will go defunct in 2024, however, said Roth, in light of Gov. Gavin Newsom’s recently proposed state budget which would expand Medi-Cal eligibility to all undocumented people who meet the income requirements. While just a proposed budget item, it’s expected to be adopted, said Roth. Newsom’s pitch comes after last year’s budget that had expanded Medi-Cal coverage to income-eligible undocumented people who are at least 50 years old. The CARES program would serve as a bridge to Medi-Cal, in which recipients could expect the same services they were already receiving.

CARES commenced in 2015, said Roth, with restrictions on enrollment due to funding. It was further hindered by a lack of community outreach. Despite that, Roth said, recipients reported “high satisfaction.” (Over 90% of CARES enrollees are Latino.)

There are about 2,700 enrolled CARES members. The program aims to recruit 5,500 more people, about half the remaining eligible uninsured population in Contra Costa. CARES is projected to have over $4 million in funding for the 2023-24 fiscal year. To meet its priorities however, the program would need another $7.5 million. Roth emphasized that the spending would stop come 2024.

The supervisors chimed in on funding after the report was concluded.

“If we do a lot of robust outreach,” said District 1 Supervisor John Gioia, “and we come in and we expand participants by a smaller amount than when you’re what you’re projecting, then obviously the funding needs won’t be as great.” He noted that the current enrollment cap hasn’t been reached.

Roth confirmed that needed funding would vary depending on the actual enrollment numbers.

Gioia raised the possibility of getting extra funding from Measure X, a tax ballot initiative that funds essential services such as CARES. Measure X will already be providing $750,000 in each year that CARES will remain in effect. Though Measure X’s total funding of services was approved for 20 years in November 2020, Gioia proposed allocating what would have been funding after 2024 (which won’t be needed after the Medi-Cal transition) to cover the extra costs for CARES’ priorities.

District 4 Supervisor Karen Mitchoff slammed hospital partners for not providing what she said was funding they owed to CARES.

Ultimately, no funding or policy approval occurred, as the board’s counsel said they couldn’t decide such things under the item in the agenda. The item was to simply accept the CARES report.

The board agreed to ask the health services director to return with a list of funding options and a “strongly worded” letter to the hospitals Mitchoff called out earlier, asking them for $250,000 apiece in each year the program remains active.

The board approved the appointment of Dr. Ori Tzvieli as the new County Health Officer. Tzvieli, who previously served as deputy health officer, has played a pivotal role in the county’s pandemic response. From what may have once been an obscure position, the county health officer is a now prolific role holding incredible influence in the ongoing COVID-19 pandemic. Tzvieli succeeds Dr. Christopher Farnitano who resigned from his role just a day prior.

Masking guidelines and other COVID updates

Roth and Tzvieli gave a COVID response update following the appointment. The average case rate per day in Contra Costa County is 683, which is down 47% from the previous week, said Roth. There has been a 15% reduction in hospitalizations, totaling 201. Roth pointed out that hospitalization numbers going down lag behind case numbers. Eighty percent of the county’s population is fully vaccinated, she added.

It’s because of this achievement that the county last week lifted its mandate for businesses to verify patrons’ vaccine status, said Tzvieli. However, less than half the county is boosted.

California recently announced it would lift its indoor mask mandate Feb. 15. As of the meeting, the county had yet to make a decision on its own masking requirement, but on Wednesday it opted to join most of the Bay Area and stop requiring vaccinated people to wear masks in most indoor settings, effective Feb. 16.