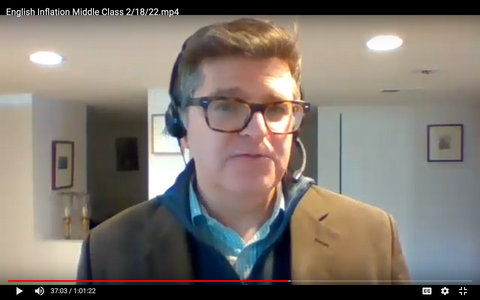 “We have inflation because COVID imposed extreme distortions on the economy,” Josh Bivens of the Economic Policy Institute said during a Feb. 18 Ethnic Media Services teleconference. (Screenshot captured by Danielle Parenteau-Decker / Richmond Pulse)

As inflation has been rising, many people are feeling economic pressure as they deal with increasing costs.

Getting this inflation under control is not an easy fix. But economist Josh Bivens is hopeful it will come down soon.

Bivens, director of research at the Economic Policy Institute in Washington D.C., shared his perspectives during a Feb. 18 Ethnic Media Services press teleconference that examined the effects of inflation on the middle class, in particular.

And he pointed the finger directly at COVID-19 as a major factor triggering the current inflation.

“Basically, we have inflation because COVID imposed extreme distortions on the economy, both on the demand side and the supply side,” he said.

Alissa Quart, executive director of the Economic Hardship Reporting Project, said those distortions are causing plenty of problems for people. “The middle class looks like the unstable working class in terms of contingency, job anxiety, economic doubt, inability to pay basic fees and rent,” she said.

Many families only appear to be in good shape, she added. They might have a nice house, for example. But their financial standing is precarious.

Bivens said the current economy does have bright spots, including the creation of 6.5 million jobs in 2021.

“An unprecedented rate of growth,” he said.

And despite the effects of the pandemic, he said the workforce is in far better shape than after the Great Recession.

He said much of the credit goes to the fiscal relief the government has provided.

“That has been what has sort of slungshot the economy pretty quickly back to a better labor market,” he said. “To just give up on that in the name of fighting inflation, that is far from costless.”

Bivens disagreed with critics who claim the government relief is a cause of the current inflation. “There’s really weak evidence for that,” he said.

Inflation is common among wealthy nations right now, he added. But economic relief during the pandemic hasn’t been.

“The United States, strangely — given that we’re not usually a very generous welfare state — did a lot of fiscal relief this time,” he said. “But other countries did not, and yet inflation rose in every country. So there’s something common and global and not related to fiscal relief that is driving this inflation.”

Bivens was referring to the COVID-19 pandemic, of course.

“On the demand side, it led to a huge shift in what people spend their money on,” Bivens said. “And then on the supply side … goods need to come across a supply chain across the global economy, and COVID just wrecked the supply chain.”

He said these consequences of the pandemic are not surprising.

“It’s been a society-changing event,” he said. “Of course, it’s going to have a huge impact on the economy.”

That huge impact has meant prices have gone up on all sorts of things, including gasoline, groceries and big-ticket items.

But Penny Wang, deputy editor at Consumer Reports, offered tips to save money.

“Our recommendation is to really be very strategic about your shopping and your spending,” she said.

“It’s not a great time to buy a car,” she said. Or other items such as most electronics. “If you can wait, wait,” Wang said.

She also suggested referring to the deals section of Consumer Reports’ website and the publication’s guide to the typical best times to buy specific products.

As the price of gas rolls past $5 per gallon, even $6, saving money at the pump is difficult but not impossible.

“There’s not a silver bullet for solving that,” she said. “But we did find that there are big differences between prices at different pumps.”

To take advantage, she advised using a service such as Gas Buddy or simply paying attention to prices while you are out.

To help struggling families on a larger scale, Quart suggested “subsidizing things like education and medical care to a greater extent that other countries do.” That way, “maybe we have a little more of the support structure that we never have.”

Bivens said he believes it is not possible to lower inflation without affecting the bigger economic picture.

“There’s no knob you can turn that only reduces inflation without having consequences for lots of other things we care about in the economy as well,” he said, “like the pace of job growth and how able people are to get wage increases.”

“I think many of the policy knobs that people do want to turn to reduce inflation would actually have their own costs imposed on families that are going to be at least as high as the cost that inflation is imposing,” Bivens said.

He called two specific strategies “bad ideas.” One would be torpedoing President Biden’s Build Back Better agenda, which he said has “kind of already happened.” The second would be to have “the Federal Reserve get really aggressive” and raise rates very quickly to try to lower inflation.

The Federal Reserve announced Wednesday that it would raise interest rates 0.25%, the first such hike since 2018. The increase applies to multiple areas of consumer borrowing, including credit cards and car, home and private student loans. (Federal student loans are not affected.) On the plus side, it could also lead to a rate increase on bank accounts that pay out interest, though that’s not guaranteed.

“I think the good news is that, I think, there’s a lot of reasons to think by the middle of 2022, and definitely by later, it’s going to start to decelerate pretty significantly just on its own,” he said.