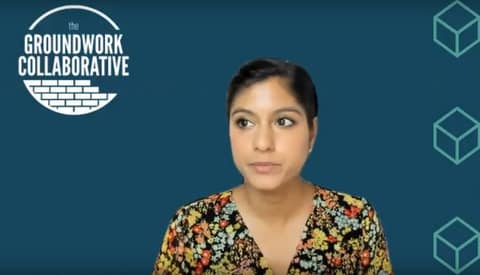 Economist Rakeen Mabud asked and answered the question, “Why is that corporations have so much power to profiteer in a moment of crisis?” during a July 8 Ethnic Media Services press briefing on inflation and recession. (Screenshot captured by Danielle Parenteau-Decker / Richmond Pulse)

From the grocery store to the gas pump, prices have gone up across the board. Corporations have cited inflation, workforce shortages, wage increases and supply chain disruptions among the reasons why.

But they all may be excuses.

While these things have affected companies, they have passed most of their increased costs on to consumers. And some corporations are reporting record profits while many working Americans struggle to afford the things they need.

“Mega corporations are taking advantage of this crisis to pad their profits by passing along more pricing than is justified by rising input costs alone,” said Rakeen Mabud, chief economist and managing director of research and policy at the Groundwork Collaborative. (Input costs are “the set of costs incurred to create a product or service,” including direct labor, direct materials and overhead, according to AccountingTools, a company founded by a certified public accountant to provide information and training to practicing accountants.)

Mabud spoke on a panel hosted July 8 by Ethnic Media Services to discuss current inflation and the prospect of a recession.

“Nearly 54% of recent inflation can be attributed to corporate profits, which is in contrast to the 11.4% stake that corporate profits had in rising prices between 1979 to 2019,” Mabud said, referring to Economic Policy Institute data.

A report by the Roosevelt Institute, released in June, showed “that corporate profits hit record highs in 2021, and corporations increased prices at the fastest rates in decades,” she said. “It also detailed that the corporations, on average, charge consumers 72% more than their input costs, compared to 56% pre-pandemic.”

She said her organization examined hundreds of earning calls “to understand why it is that profit margins are at a record high.”

They found the same thing repeatedly across sectors: CEOs saying that the current economic “environment has created opportunities to extract more and more from consumers by raising prices,” she said.

Mabud pointed to one particularly glaring example in Constellation Brands, which owns Corona and Modelo.

“As you know, we have had a consumer set that skews a bit more Hispanic than some of our competitors, and in times of economic downturn, if you will, or weakness, they tend to get hit a little bit harder and recover a little bit slower,” Constellation’s chief financial officer said in January. “So we want to make sure that we’re not leaving any pricing on the table. We want to take as much as we can.”

Even as companies recognize customers may be hurting, they’re still trying to take advantage of them, Mabud said. “In the exact same breath that they’re acknowledging their consumers are hurting, Constellation’s executives are expressing excitement over exploitative and aggressive pricing to maximize their profit margins.”

Credit card companies like Visa and MasterCard make their money by charging a percentage fee on every transaction, so when things get more expensive, they automatically earn more money.

“But, of course, these companies aren’t content to stop there,” Mabud said. Both Visa and MasterCard raised fees this year.

These corporate practices hurt those who are often already at a disadvantage, including small businesses.

“They can’t set prices the way big companies can. They have to sort of swallow those costs and pass them off to their consumers,” Mabud said. “And often, that results in them losing their market share because consumers abandon them for the Walmart down the street that can negotiate better prices or can be first in line for goods in the supply chain.”

>>>Read: Small Businesses Are Still Fighting to Survive the Pandemic

In addition, “across recessions, we see a pattern where workers of color, low-educated and low-income workers are the first to experience job and income loss and really bear the brunt,” said Alix Gould-Werth, director of family economic security policy at the Washington Center for Equitable Growth.

While corporations have used conditions created or worsened by the pandemic as cover for rising costs, their ability to do so dates much further back, Mabud said.

“Why is that corporations have so much power to profiteer in a moment of crisis?” she asked. “We spent 50 years allowing business executives and shareholders to really take control of our supply chains.”

She said they cut costs and fail-safes to “maximize their short-term returns for their shareholders over an effective system that actually delivers goods on time.”

When a war or a pandemic causes economic crisis, Mabud said, consumers will experience shortages that can drive up prices. “And again, during moments of those crises, big corporations can use their dominant market power to jack up prices beyond what we would expect, given their input costs, by hiding under the cover of inflation.”

She also talked about what is not causing inflation: worker wages and investments in our economy such as the American Rescue Plan. Research shows both have minimal impact on inflation, she said.

For all the good the American Rescue Plan did, it was still just one of the “Band-Aid solutions” used to help people get by, said Gould-Werth.

During the COVID recession, she said, “Congress made radical one-time changes to the system of income supports.”

Those changes also included providing economic impact payments — the stimulus checks — and expanding the Child Tax Credit and the amount, duration and eligibility criteria for unemployment.

“The political will to make these changes was unique, and it was spurred by an unprecedented health crisis,” Gould-Werth said. “But when the political will shifted and the provisions expired, families suffered.”

Changes like those do help in the short-term, but effecting economic change over the long run is a much bigger task.

“The inflation we’re facing is a problem with deep roots,” Mabud said, “and there’s no surface-level solution that’s going to get rid of it.”