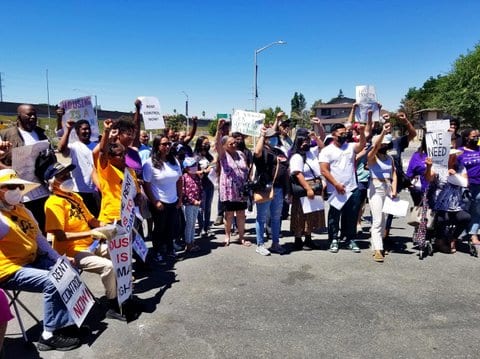 After more than a year of trying, the Antioch City Council passed a rent stabilization ordinance Tuesday night before a cheering room full of renters and advocates, many of whom say rising Bay Area rents have them on the verge of homelessness.

The new ordinance will cap rent increases in the city to 3% of their rent, or 60% of the Consumer Price Index in the San Francisco-Oakland-Hayward Area, published by the U.S. Bureau of Labor Statistics, whichever is less.

The ordinance will allow one rent increase within 12 months.

“This is the first part of our overall renter’s protections — rent control — that I’ve proposed,” said Mayor Lamar Thorpe. “Just cause and anti-tenant harassment policies will be coming after this. So there’s two more opportunities to solidify these protections in the city of Antioch.”

Barbanica said he wanted to stop rent increases that, in some cases, are jumping 30% or more, which he called outrageous.

But Barbanica said the biggest hikes are coming from larger corporate property owners, not the “mom and pop” landlords who rent one or two units and try to keep up with inflation.

He supported eliminating loopholes in state laws frequently exercised by corporations and having Antioch fashion a law more in line with California’s 2019 Assembly Bill 1482, which capped rent increases statewide at 5% annually, plus any rise in CPI not exceeding 10%.

“I support us doing something, but don’t support us going down to where it’s harming, not the corporate folks; I’m talking the mom and pops,” Barbanica said.

“I know a lot of mom-and-pop renters, and they always remind me that they never raise their rents beyond a reasonable amount,” Thorpe said. “So I’m always at a loss as to how they will be impacted. And every time I ask that question, no one can ever come up with a response as to how this law will impact them in a negative way.”

Some owners will be exempt, including those owning single-family homes without an accessory unit, condominiums and cooperatives. Units first receiving a certificate of occupancy after Feb. 1, 1995, are also exempt from the city ordinance.

Activists say about 150 people were given rent increase notices at both properties, and many could end up homeless. Advocates asked the council for an emergency ordinance freezing rent increases and a moratorium on evictions, actions the council said it couldn’t do since Antioch — unlike charter cities like Oakland, Berkeley and Richmond — is a general law cities without the same flexibility to enforce rent moratoriums without the state’s backing.

According to a staff report for Tuesday’s meeting, Antioch has 49,236 employed residents, two-thirds of whom earn less than $50,000 per year. Household income disparity is even more prevalent for Antioch seniors, 41.2% of whom are people of color “who often live on fixed incomes and are more likely to have disabilities, chronic health conditions, and/or reduced mobility,” the report says.

The largest proportion of senior households who rent are extremely low-income and approximately 40% of Antioch’s large family households are “cost burdened,” almost half of which is “severely cost burdened,” meaning the households pay more than half of their income on housing,” according to the report.

The ordinance would also allow tenants to recover damages from landlords and allow criminal prosecution of those not in compliance.