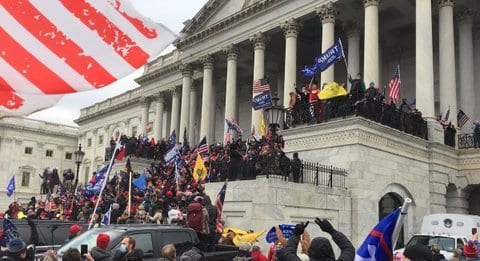 06 Jan The ‘Lie Lives On’: Jan. 6 Set Off Wave of Restrictive Voter Laws

Posted at 12:51h in National, Politics by Danielle Parenteau-Decker 0 Comments

The Jan. 6, 2021, was partly driven by false claims of election fraud, which were also used to justify discriminatory voting restrictions. (Photo courtesy of Ethnic Media Services)

Editor’s Note:  Two years after false claims of voter fraud fueled the Jan. 6 insurrection at the U.S. Capitol, those same lies are shaping restrictive voter laws in a slew of states nationwide, explains Sean Morales-Doyle, director of the Voting Rights Program at the Brennan Center for Justice. And they are targeting primarily voters of color. He spoke with EMS about the January 6 anniversary and what he sees ahead in the fight for voting rights.

What are your memories from that day?

I was working. I was in my apartment in Brooklyn and of course, like much of the nation I was watching things develop on the news. It was a surreal moment… we were in this pandemic, and we had a lot of concerns starting in the spring of 2020 in terms of how our nation was going to handle a presidential election. We had done a lot of very intense work to make sure our democracy fared well. And then it did. The fact that we had the highest voter turnout in a century at a time when we were going through these unprecedented circumstances was an overwhelming success. And then we’re caught up in non-stop election disinformation and it all ends with this terrifying attack on our democracy. 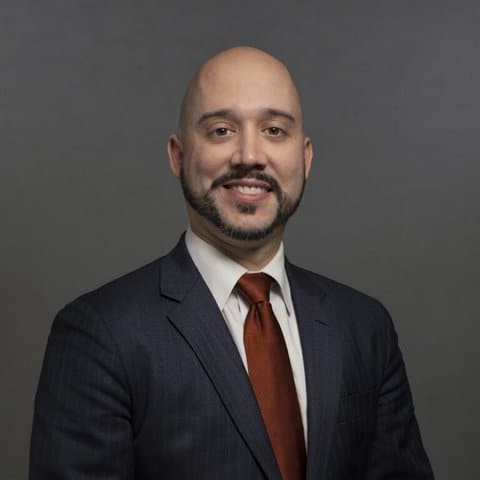 Two years out, what is the connection between January 6 and efforts to restrict voting?

Part of why we are seeing these attacks (on voting rights)… is a backlash to voters, and particularly voters of color participating at high rates. You see this in the way Jan. 6 developed. The false narrative that Trump used to claim the election was rigged was that there was massive fraud happening. He made that claim specifically about minority-majority cities, places like Philadelphia, Detroit, Milwaukee, and bizarrely Harris County, Texas, where he won. It was always focused on racially diverse parts of the country where we saw extremely high turnout in 2020. And that was used to justify attempts to overturn the election. I do not for a second believe that was an accident. That was intentional.

And that lie lives on, manifesting itself in ongoing attempts to restrict access to voting for people of color. In 2021, and into 2022… we saw an unprecedented wave of voter restriction laws passed in states around the country. And what we found was that many of the lies told in frivolous litigation filed by the Trump campaign and its allies in 2020 to try to overturn the election found their way into legislative provisions introduced in state legislatures in 2022. These were pieces of legislation directed at fixing problems that were conspiracy theories.

Would any of this have been possible under the Voting Rights Act?

Many of these laws would have been stopped by preclearance (a provision of the VRA requiring certain states to gain court approval for election laws deemed harmful to minority voters). In Texas, Georgia, Arizona… before 2013 (when the Supreme Court undid portions of the VRA under Shelby v. Holder) if these states tried to enact any of these bills, they would have been held up to determine if they would have a discriminatory effect. And we know that some of them did. In Texas, we showed that one piece of SB1, requiring voters to put ID numbers on their mail ballot applications and on their mail in ballots, ended up with tens of thousands of voters having their ballots rejected, and that those voters were disproportionately Asian, Latino and Black. And so, that is a policy that would not have survived preclearance.

Looking at the year ahead, what are some red flags regarding voter access?

The Supreme Court, through a series of shadow docket decisions, has inappropriately expanded what is called the Purcell principle, which states federal courts shouldn’t change state election law in the lead up to an election. Even if a court finds there is a reason to block a state law governing elections, they should be hesitant to do that right before an election because it may do more harm than good. That was the justification for SCOTUS blocking a lower court decision striking down Alabama’s redistricting map as discriminatory. This principle has now been expanded to the point where the message to lower courts is, you shouldn’t be ruling on any of these cases before elections. And the message to state legislatures is that the things they do in these odd years are unlikely to be blocked before the election year. So, if you are in the Texas Legislature, the lesson is, if we do something in 2023, it will be in effect in 2024. I hope that’s not true, but I think they have reason to think they can play games in 2023.

Where should reporters wanting to cover voting rights be looking?

The focal point of this fight unfortunately is not in Congress. We would like for it to be. We came very, very close early last year to getting Congress to act on these issues and to pass the John R Lewis Freedom to Vote Act, but despite majority support, that didn’t happen because of the filibuster. The fact that the House is at a complete standstill for the time being… means it is even less likely that anything is going to happen on these issues in Congress. Because we have local election administration in the U.S., most of these fights are playing out at the state level. It is happening in counties and states across the country. Reporters need to be following what is happening in state legislatures, in county election administrations. And that can be difficult because the rules differ, and it is a lot of territory.

We saw that our democracy is resilient in 2022. We saw that courts will stand up to election sabotage. And, thankfully, 2022 election deniers did not fare well. Voters showed how they feel about election denialism and efforts to undermine democracy. And on the other hand, I think Republicans that had been pushing this agenda… have been sent a loud message by voters that they don’t like it and that it is not a good political strategy. I am hoping we will make progress in the next couple of years building on that message from voters that they don’t want to play these games with democracy.