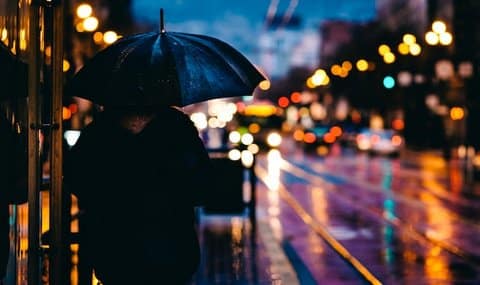 13 Jan Shelter from the Storm Not Enough for Homeless People

Posted at 09:23h in California, Commentary by Danielle Parenteau-Decker 0 Comments

(Photo by Todd Diemer on Unsplash)

We woke up to the sight of a cop standing outside. It was only sprinkling then. He stood near the cover of the carport — where they always did — and waited for the homeless man to collect his belongings. I remember them leaving, but it was easy to forget about where he might go.

At that time, only a few days after the beginning of the year, the storms had already begun in California. With them came a bombardment of power outages, evacuations and advisories of floods that would actually happen. So, sandbags were made available for free and, maybe as a way to reassure ourselves, we wondered how this would help with California’s neverending drought.

These storms are caused by atmospheric rivers, which are parts of the atmosphere that move water vapor from one place to another. Atmospheric rivers are not at all new to California and usually are not even a cause for concern. They even provide the western United States with sometimes up to 50% of its annual precipitation.

Each year from 2018 to 2022, atmospheric rivers caused flooding events throughout California. People died and lost homes. As a state, though, we continually recovered from the damage and moved on. Things would get better for us.

But “us” often doesn’t include unhoused populations. From tents, sleeping bags and under tarps, people experiencing homelessness face the storm head-on. Shelters provided by nonprofits and counties that pop up during a storm like this are not enough to protect an increasing homeless population.

During the pandemic, California’s homeless population increased by over 20,000. In Contra Costa County alone, there has been a nearly 35% increase in the homeless population since 2019. And, in both cases, the availability of shelters also rose. The county saw a more than 30% increase in shelter beds since 2019, and California overall added over 14,000 beds in the past four years.

But residents lost their jobs first — or that job was no longer paying enough for someone to survive — then the health insurance from the job or elsewhere, and eventually their residence. A shelter at that time was not enough, and it isn’t enough now.

Good weather allows us to de-prioritize the most vulnerable communities, including the unhoused population. Bad weather shows us how fragile and hollow our attempts have been by not focusing enough on supportive services and the challenges within them.

Throwing money at the problem by budgeting and adding new taxes seems easy enough. In Contra Costa, voters approved Measure X, a county sales-tax that later would fund the Local Housing Trust Fund’s work toward affordable housing. Nearly 60% of voters voted for the measure. Solutions like this can help, but it’s not the only thing that matters.

People need ongoing support in the form of physical and mental healthcare — over 30% of those experiencing persistent homelessness in California have a disability — as well as case management and other supportive services.

Current storms can exacerbate health conditions, especially in the unhoused population because of their increased exposure to the elements. Would a shelter during the storm fix that? Not always. In cases where shelters are completely safe from the elements — and they aren’t always — they may be understaffed and overworked, lack access to supportive services or be incompatible with a client.

When the storm ends, residents likely may leave the shelter. And, in some cases, people don’t want to go to an unfamiliar shelter because they don’t want to leave behind belongings. This shows that outreach is always important but especially when expecting a storm. The trust and dependability people come to know can help inform and temporarily shelter unhoused populations.

As more storms approach, I know nothing will change in time. The same man won’t be sleeping outside my door, but somebody else will.