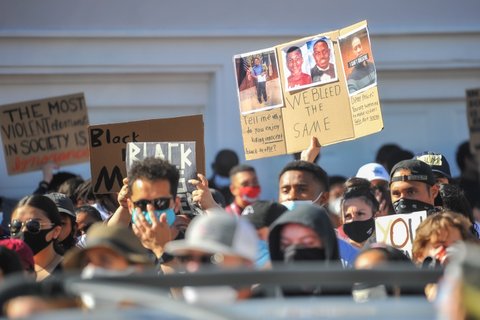 “Generally, I take a lot from the older generation,” said Kimyatta Newby who, at 17, co-organized the protest above, held in Pinole last month. (Denis Perez-Bravo / Richmond Pulse)

A focus on systemic injustices against Black people has sparked many youth-led protests in West County and beyond, showcasing a movement’s new blood while carrying on a tradition of activism.

These recent demonstrations amplify a unified Black voice against racism with 90% of Black people saying racial and ethnic discrimination is a “big problem” in the United States, according to a national poll released by Monmouth University in early June. Still, that level of agreement obscures a generational divide as, some say, young activists need to recognize and learn from the efforts of those who stood before them.

Former Richmond City Council member Jim McMillan found himself thrust into the struggle against police violence in Richmond in the 1980s.  At the time, he owned a local pharmacy, which he said gave him a special relationship with the community in those days. McMillan would often hear young people complain about interactions with the police. He didn’t think much of it until an ill-fated encounter with law enforcement.

McMillan said that one night, after closing up, he ran a stop sign at Macdonald Avenue and 3rd Street and got pulled over. Because of his light complexion, the officer apparently did not realize McMillan was Black until checking his driver’s license.

“When I showed him the driver’s license, he shined the light on the section of the license, I’m sure, that said ‘race’ because all of a sudden he put the flashlight in my face, which was almost blinding,” McMillan said. “He saw the race, and his friendliness changed so much so that I refused to sign the ticket and told him I would rather go to jail.”

McMillan said that incident propelled him and other local business leaders to unite and fight for an increase of Black officers in the Richmond Police Department.

“There were a number of Black businessmen, particularly,” McMillan said. “I think it came to the attention of the entire community and, of course, at one point, we were able to get the first Black city manager in Richmond’s history, Larry Moore, who helped us to change a lot of things.”

Engaging with the systems that caused that incident made McMillan a voice for his community, something that extended further than he ever envisioned.

“It became such a prominent issue that a couple of Black youngsters called me from San Quentin and wanted me to talk to the officers there,” he said. “I didn’t know the youngsters, and I was flattered they believed I could help them because when you are desperate for help, anybody who shows a little responsibility and influence is” a source of inspiration.

Today, as more young people take up the cause, Manu Ampim, chair of the history, anthropology and geography department at Contra Costa College, said there is not enough connection between newer and older movements.

“Black Lives Matter, for example,” does not really have a “relationship with [the] “seasoned organizers and seasoned activists” from the Student Nonviolent Coordinating Committee, the Congress of Racial Equality, the Black Power movement or the Black Panther Party, Ampim said, referring to some of the most prominent organizations of the civil rights movement of the 1960s.

During that pivotal time, SNCC and CORE were instrumental in fighting for the desegregation of schools as students organized sit-ins on campuses across the United States.

The same ethos behind today’s movement drove activists back then, but the youth now don’t realize it, Ampim said.

“We have a lot of young people who have the same spirit, the same energy, the same determination, the same fearlessness that you see when people fought against the police in the ’60s in Selma, in Birmingham and in all these other places,” Ampim said. “They were rebelling across the country, they were burning America down, which is the same as today, but what is different now is that young people, they don’t understand that they aren’t doing anything new, and some of them believe that people before them didn’t do anything, which is why Black people, Brown people and others are in the predicament they are in.”

To rectify this, Ampim said, the youth need to be mentored by — and willing to learn from — the older generation.

“They don’t understand that in every generation people have made great contributions to further the struggle against white supremacy and racism in America,” he added.

Some young activists, however, dispute that idea and say they are keeping an eye on the past.

Lavonia Bobo, an organizer with the recently formed Richmond Revolution, says something new is indeed happening, but it’s inspired by history.

“I think for the last couple years, especially with my generation, we haven’t seen something this lasting,” Bobo said. “Something would happen, somebody would be murdered by the police, and there would be a couple of protests, but this has been lasting for almost a month now, so that right there is very, very huge.”

Bobo said that the shutdown due to COVID-19 has allowed people who might not otherwise have had the time to learn the history that bridges the gap between the present and the past.

“I feel like us being in the house has actually given us momentum to be in unison,” Bobo said. “I also feel like this movement that we have is looking a lot like back in the past. The Richmond Revolution, specifically, we’re really looking at the Black Panther movement and what their ideology was about abolishing police and abolishing prison systems. They were already discussing these things, so we asked ourselves, ‘How do we make it look differently [in] 2020?’”

She said that the focus of the group at the moment is working to defund the Richmond Police Department and organizing panels to educate the public on what the West Contra Costa Unified School District will look like with officers removed from campuses.

Richmond Revolution approaches this work with a Black Panther mentality, Bobo said, which includes counteracting the idea of “peaceful” action against the system.

“This whole idea of being peaceful and ‘peaceful’ protests … was really pushed during the Martin Luther King Jr. generation,” Bobo said, “and we kind of combat that because nothing that you do that is against this state and against this system that we’re fighting will ever be considered peace because it’s actually made to create disorder.”

Kimyatta Newby of Richmond, who helped successfully organize a protest in Pinole, agreed there is much to be gleaned from those who fought their own battles during the civil rights movement of the 1960s.

“Generally, I take a lot from the older generation because the older generation was also teenagers when they needed to protest,” Newby said. “Everybody wants to say, ‘I’m not my ancestors! I’ll put hands on you!’ but our ancestors fought. So we take what they did and put it in a more modern way and see what’s best to keep our generation and younger generations going.”

Newby said there needs to be an understanding and collaboration between the elders and the youth that allows young people to learn and take charge of the movement.

Newby said the youth need to have clear communication with elders and be open to listening to their advice and that the elders need to respect and empower the voices of the youth.

“The best way to do that is to make it clear that you are taking that advice and importing into what you are projecting and organizing, but also I feel that to get respect you have to give respect,” Newby said. “We have to respect one another, and if the older generation is putting down the younger generation or constantly belittling the movement, then we are not going to sit there and take disrespect.”

Malik Seneferu, a San Francisco native and Richmond resident, is using cultural spaces to bring generations of Black people together. With unification in mind, he has been organizing his fellow local artists to create murals, including “Reparations Now” in Richmond.

“This time that we’re in, the bridging of the gap is, right now, technology and cultural development with cultural continuity and community engagement,” Seneferu said. “When we have elders that come out and help with the painting because they want to be able to say something in their community, at the same time, you have a young person who has their social media.”

“The great thing is a lot of our young people in these events, they sort of turn away from their social media, or if they’re using their social media they are feeling good about it and are helping an elder or someone near them,” Seneferu said. “It’s really spreading the positive energy.”

The way to bridge the gap then, Seneferu said, is reiterating what the Black community has long been advocating for and joining the youth’s voices with their ancestors’.

“There were a list of demands that were already made that were being overlooked and people would roll their eyes when the demands were made like, ‘OK, here they go with that stuff again,’ ” Seneferu said. “So how we pull together the young and the old is we talk about the demands, demands that long existed before the young came. But then the young get to have leadership over a voice that long existed before they were born.”

This singular voice, Seneferu said, then creates the unity needed among generations.

“The elders actually understand that very well. They know it, and they say, ‘The kids are shouting out the things that we have been demanding for so long,’ ” Seneferu said. That understanding strengthens the relationship between the young and the old, which then starts to dispel the assumptions each has about the other.

“The idea is we know what we need,” Seneferu said. “We know what has happened in the past, and I think that young people are coming to understand now, more than ever, that the past is very relevant to the future.”