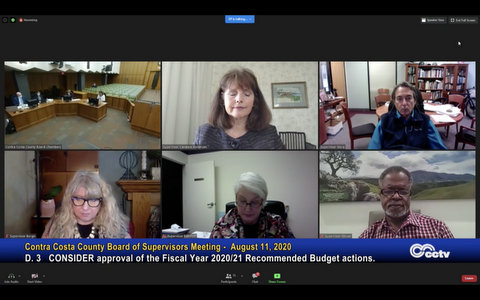 The Contra Costa Board of Supervisors decided Tuesday to approve 25 new positions for the Sheriff’s Office and to renovate the county jail in Martinez, despite repeated calls from the public to reduce the sheriff’s budget.

Of the approved positions, a lieutenant and 23 deputies are intended to staff the Martinez Detention Facility and help provide mental health support for inmates, according to a budget presentation by Sheriff David Livingston last week. These positions will be financed for six months with about $1.75 million in federal CARES Act funding. The county will then need to fund the positions in subsequent years through its general fund, said county administrator David Twa. The 25th spot will go to a county patrol position.

Supervisor John Gioia said he understood the need for inmate mental health care but questioned how the county had decided upon the number of proposed positions. He asked why deputies from the Marsh Creek Detention Facility, which was previously emptied of inmates, couldn’t take on some of the burden.

“I don’t know whether the number of 24 is correct or not,” Gioia said. “There is some need, clearly, for some deputies.”

Undersheriff Michael Casten said the number of deputies at Marsh Creek had been reduced prior to transferring the remaining 24 inmates to West County. Only 10 deputies were working at the jail when the decision was made to transfer the inmates, and seven deputies transferred after the decision.

Gioia and many public speakers suggested that money saved from closing Marsh Creek could be spent on services. Dozens of public commenters opposed spending money from the CARES Act on the Sheriff’s Department.

>>>Read: Who Responds to Nonviolent Crises? New Urgency to Remove Police from the Equation

“There are other things in this county that we need besides sheriff’s deputies,” Willis said. “Take away everything from a person, and give them no support, you’re setting them up to fail.”

Gigi Crowder, executive director of the National Alliance on Mental Illness Contra Costa, said she was having a hard time with funding the deputies because she’s aware of the great need for mental health services in the county. She also said the bulk of people with mental health issues jailed in the country don’t have the same complexion as those making decisions about what happens to them.

Crowder called for more progressive and culturally responsive approaches to addressing people with mental illness, and for the country to stop “caging Black and Brown people in a disparate manner.”

“We have built a fail-first system,” Crowder said. “We initially don’t have the resources. The individuals can’t get treatment. They then commit a crime while untreated, and then we cage them, don’t show the compassion they need, and then we want to hire guards, basically, to watch over them.”

Some public commenters also disapproved of a $16.3 million renovation of the Martinez Detention Facility which would transition some existing cells into “mental health cells.” The board unanimously approved this proposal.

“What’s missing from this conversation today, both from the public and others, is the fact that of the CARES act money we’re spending, over $150 million of that is going into the health system, not to the sheriff’s deputies,” Twa said.

“While we all want to move toward having more mental health services in the community, we’re also faced with the reality of providing mental health services for those the system sends us,” Gioia said. “While our goal is not to have them be in our system, we have to figure out what we can to improve services to them while they’re here.”

In other news, the board unanimously voted not to take a position on Propositions 19 and 22, which will come before California voters Nov. 3.

Prop 19 would change the rules for tax assessment transfers for homeowners. Currently, people over 55 — as well as people with severe disabilities and victims of natural disasters or hazardous waste contamination — can transfer their tax assessments to a new home of equal or lesser value, meaning they don’t have to pay the higher taxes that would come from moving into a new home.

This increase in taxes for those who move to a new home is largely a result of Prop 13, which limited property tax growth in California and effectively gave longtime property owners a growing tax benefit. Property taxes are only reassessed using the full value of the property when it changes hands.

Prop 19 would expand tax assessment transfers to apply to more expensive homes, though with an upward adjustment on taxes, and for homes across the state. Additionally, people over 55 and people with severe disabilities would be able to take advantage of a tax assessment transfer three times, instead of one.

The proposition has several more layers, but it’s also supposed to create and raise money for the California Fire Response Fund and County Revenue Protection Fund.

Board supervisor Karen Mitchoff said she opposed Prop 19 because she thought there was more bad than good in it, and she wasn’t convinced with how the state would come up with the additional resources to finance the fire response and revenue protection funds. Supervisor Diane Burgis said the proposition could potentially help fire districts. Still, she recommended the board stay neutral because it was difficult to tell what the costs and benefits of the proposition would be.

The board was split on Prop 22, which would allow ride-hailing companies such as Lyft and Uber to consider app-based drivers independent contractors. It would override AB 5, which classifies those drivers, and many people who are considered contract workers, as employees, allowing them benefits such as unemployment insurance, minimum wage and overtime.

A lawsuit alleging that the ride-hailing companies were violating AB 5 was upheld Monday by a federal judge, who ruled the companies must classify their workers as employees.

Some members of the board said they supported the proposition because they approved of innovation, while others said they were against it because they found the labor practices of the ride-hailing companies exploitative.

“I think that these companies that are making billions of dollars need to contribute back to the community,” said Supervisor Federal Glover.