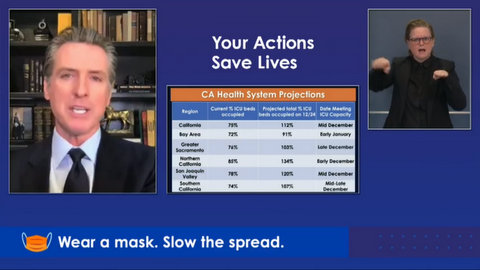 Newsom also said the state predicts that intensive care unit capacity will be filled by mid-December if trends continue as they have been and no additional interventions are put into place.

“If we see these trends continue, we’re going to have to take much more dramatic, arguably drastic, action,” Newsom said during a Monday video update.

“We are doing, relatively speaking, better than the overwhelming majority of states,” Newsom said. “But, that said, the alarming concern — it’s not just for our state, you’re seeing this in other states — is the rate of growth.”

Newsom said California is now at 6.2% positivity rate over the past 14 days. Last week, the positivity rate stood at 5.5%, and the week before last it stood at 4.7%. What’s most concerning about this trend, Newsom said, is that roughly 12% of reported COVID-19 cases will end up in the hospital. COVID-19 hospitalizations have continued to skyrocket along with the case rates, rising at an 89% increase in the 14-day average to a current number of 7,787 patients.

Intensive care units are a particular area of concern: About 10% to 30% of patients hospitalized with COVID-19 require ICU care and respiratory support, Newsom said. And ICU admissions have increased 67% in the last two weeks, to 1,812 patients. The state projects that California will meet ICU capacity in mid-December and exceed bed capacity by 12% on Christmas Eve, said Newsom.

Newsom said the state was considering stay-at-home orders in counties where COVID-19 transmission is most widespread. Over the weekend, nine counties moved backwards on the state’s color-coded reopening system. Now, 51 counties are in the most restrictive purple tier, six are in the red tier and one is in the orange tier.

But, Newsom said, the state is expanding its reopening criteria beyond the case rate and positivity rate required by the reopening system. Now, the state is considering hospital and ICU capacity as well, particularly in purple tier counties.

“We are now looking at real time at hospitalization numbers and ICU capacity in those regions,” Newsom said. “We are assessing this in real time over the next day or two to make determinations of deep purple moves in the purple tier status that is more equivalent, more in line with the stay-at-home order that folks were familiar with in the beginning of this year.”

California Health and Human Services Secretary Mark Ghaly said the state is doing all it can to anticipate the surge by building beds, adding staff and making sure equipment is available. Ghaly added that the high case rates over the past two weeks haven’t even begun to impact hospitals yet.

Newsom said California has the largest personal protective equipment stockpile in the country and more ventilators than any other state. Eleven surge facilities are also available throughout the state; they hold a total bed capacity of 1,862 and include the Craneway Pavilion in Richmond, a 250-bed facility, according to health officials. Each of the surge facilities would be ready to go within 24 to 96 hours, Newsom said, and it’s likely they’ll have to become fully operational.

Newsom also said that California anticipates receiving about 327,000 doses of pharmaceutical giant Pfizer’s COVID-19 vaccine in mid-December, with more doses and additional vaccines to come. The first doses will go to first responders, he said.

Newsom added that California can’t continue to support businesses and residents alone, and noted that it’s been 248 days since the Federal CARES act passed and funding is drying up.

“We need Congress to act with urgency,” Newsom said. “Urgency is not January, February, March and April of next year. Urgency is today. Urgency is tomorrow. Urgency is a 24-hour effort, seven days a week, to figure this out and to get something done.”