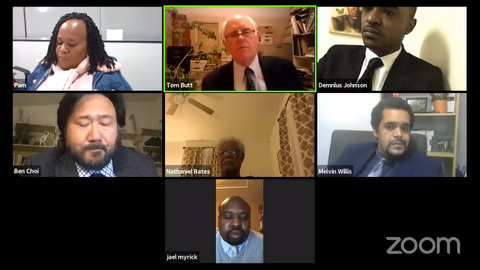 Posted at 10:16h in City Government by Danielle Parenteau-Decker 0 Comments

The Richmond City Council approved a development plan Tuesday to build up to 4,000 residential units and more upon 89.6 acres of the historically polluted Zeneca site.

The Council approved the plan 4-2-1, with Council members Melvin Willis and Eduardo Martinez voting against and Jael Myrick abstaining. The vote came after a contentious five-hour meeting spent almost entirely on the Zeneca item.

The plan includes development of between 2,000 and 4,000 multifamily residential units upon the site, which is located between the Richmond Annex and the Marina Bay area. Additionally, the plan includes the development of roughly 50,000 square feet for retail and business uses, including a 20,000 square foot grocery store. And 30.7 acres will be reserved for parks and open space, according to the agenda documents.

Much of the controversy at the meeting stemmed from the incoming arrival of two new Council members, Gayle McLaughlin and Claudia Jimenez, and how they would affect the vote. Both have opposed the development at the Thursday meeting and elsewhere, and, if given a chance to vote, would likely break the current Council majority that voted in support of the project and supported the cleanup plan that facilitates it last year.

Right at the start of the open session, Willis motioned to hold the item over until next year, when the new Council members will be seated. “Regardless of how people actually land on this issue, we do have two Council members that will not be here to see it through,” Willis said.

Council member Jael Myrick said he abstained from voting to allow either the current or upcoming council to decide. However, he said, opponents of the development made him want to vote for the development because rhetoric expressed by them made him think people didn’t understand the decision they were making.

Myrick specifically took issue with comparisons that have been made of the “lame duck” council — meaning that a new council has been voted in but has yet to replace the old council — to President Donald Trump.

“Our job doesn’t stop in December,” Myrick said. “This is the process that we’re on. Nobody’s trying to push this through.”

Many public commenters took issue with the cleanup plan the Council approved last year, which was approved a month later by the California Department of Toxic Substances Control. The plan involves removing small portions of contaminated soil and capping the remaining toxins. Some public commenters asked instead for the Council to implement a plan unanimously approved by the Council in 2018 that would involve a full cleanup.

Myrick said there were essentially three options before the Council. They could leave the “toxic mess” in the ground; they could follow the cleanup and development plan before them; or they could continue fighting for a full cleanup. But the full cleanup option has its own issues, he said, citing the DTSC approval of the capping option, which estimated that the full cleanup would require 64,370 truck trips and 10 years to implement. In comparison, the capping option requires an estimated 1,050 truck trips and would take two years to implement.

“Let’s understand what that [option] means: That’s 63,000 truckloads of toxic waste being transported through and out of the city of Richmond,” Myrick said. “That is a higher increase of risk to all the people of Richmond.”

During public comments, McLaughlin said the community has been asking for a robust cleanup of the site for over 17 years. She said the city shouldn’t be satisfied with the DTSC approval, and quoted a post from Mayor Tom Butt’s eforum from 2005.

“They are all inept government bureaucracies that are essentially incapable of doing anything other than sitting at desks and shuffling paper,” Butt wrote. “In the end, effective resolution of these problems usually falls to ordinary citizen activists.”

McLaughlin said Butt was making a serious mistake by defending the DTSC, and alleged it’s a “captured regulator, capitulating to the developers and corporations they are supposed to regulate.”

“Marina Bay has turned out to be one of the most attractive areas in the city,” Bates said. “We went in and cleaned it up.”

Willis said he’s not an expert on cleanup, and something needs to be done to address toxicity on the site. But he expressed a worry about building on a toxic site and having future residents be exposed. He said he already gets complaints regularly from residents about being exposed to toxic materials, and he doesn’t have answers for them.

“Now, I’m looking at a project that is definitely going to be built on a toxic site,” Willis said. “I’m looking at that same thing coming up for the next generations and I can’t say I’m supporting a housing development here because I wouldn’t be able to guarantee future resident safety.”