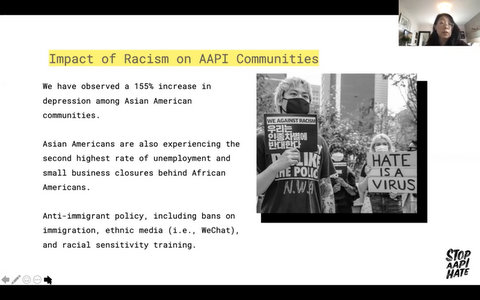 Posted at 08:00h in Uncategorized by Danielle Parenteau-Decker 0 Comments

A panel of speakers expressed the importance of racial solidarity Feb. 19 in a discussion, sponsored by Ethnic Media Services, of the recent spike in attacks on Asian and Pacific Island Americans.

John C. Yang, president and executive director of Asian Americans Advancing Justice, said Asian Americans have been fighting two viruses for about a year: COVID-19 and racism. Everyone has had to deal with the health and economic impacts of the virus, he said, and many communities — Black, Latinx and Native American, in particular — have suffered more from the virus over the past year than the general population.

Racism against Asian Americans, Yang said, has been further enhanced by inflammatory rhetoric issued by former President Donald Trump and many of his colleagues.

“Words matter,” Yang said. “We cannot discount that we had a full year in which we had a president and some of his colleagues call this virus the ‘China virus,’ the ‘Wuhan flu’ and even worse derivations of that.”

Yang added that hate isn’t new for the Asian American community. He said when people have fear, in this case a fear of COVID-19, they look for a place to blame. And, he said, many instances of racism against minority communities arise for similar reasons.

“This fear that we have, this virus of racism, is a virus that is very contagious and affects all of our communities,” Yang said. “And we need to fight that virus together.”

Marc Morial, president and CEO of the National Urban League, said it’s been distressing for those in the Black community to see the rise in hatred and bigotry against minority groups over the last four years. He said he wanted to make clear that he stood together in urging community investment, accountability to those who carry out racist acts and to continue a commitment to cross-cultural work and understanding.

Asked whether there’s a way to make people accountable for public hate speech, Morial said he thinks there’s always been a clear line between free speech and hate speech, and that when hate speech is used it must be condemned.

“When hate speech incites acts of violence, then free speech protections go away,” Morial said. “So we need to never hesitate to call out and condemn hate speech. And we also need to make it very clear that hate speech that leads to violent acts against innocent people is illegal, it’s inappropriate and should be punishable by the law and our judicial system.”

Yang said he preferred to focus on making sure victims are getting the resources they need rather than punishing perpetrators. He added that there should certainly be consequences for racist actions, but focusing on punishment is sometimes a way wedges are drawn between minority communities.

Manjusha Kulkarni, executive director of the Asian Pacific Policy and Planning Council, said the Stop AAPI Hate Reporting Center has received over 2,800 incident reports in the last nine months — a vast majority are hate incidents and not hate crimes, she said. About 56% of the incidents took place in either California or New York state, women experience hate about 2.3 times the rate of men, and 7% of respondents are age 60 or older, according to the reports.

Those hate incidents are really what community members are experiencing day in and day out, Kulkarni said, and they’ve been reported to the center by people living in 47 states and Washington D.C. Most incidents involve verbal harassment or name calling, followed in frequency next by shunning and then physical assault, she said.

The center, which launched March 19, 2020, is a collaborative of the planning council, Chinese for Affirmative Action and San Francisco State University’s Asian American Studies department. It offers online incident reporting forms in a dozen Asian languages.

Kulkarni shared six examples of reported incidents. One involved a tech executive approaching a family during a birthday celebration and yelling racist remarks at them, swearing, and telling them they needed to leave. Another involved a driver of an unspecified ride-hailing service screaming at their intended passenger before they opened the door, demanding to know if they were coming from China.

Cynthia Choi, co-executive director of Chinese for Affirmative Action and co-creator of the Stop AAPI Hate Center, said those at the center have observed a 155% increase in depression among Asian American communities. She said Asian Americans are also experiencing the second highest rate of unemployment and small business closures, behind African Americans.

“We can say, unequivocally, through our data and our analysis that the anti-Asian, anti-China rhetoric, and overall anti-immigrant climate, scapegoating, blaming, is directly responsible for the unprecedented levels of interpersonal attacks that we’re seeing,” Choi said.

Kulkarni said a lot of work is needed to undo what Trump said. Too often, she said, minority communities are pitted against each other. And, she said, too many people in AAPI communities accept wholesale the model minority myth and anti-Blackness.

What needs to be done is remembering the rights brought about by the civil rights movement, she said, and the Black leaders who led it.

Choi said perpetrators of violence need to be held accountable, but it needs to be done in a way that doesn’t contribute to more violence and incarceration.

“We’re looking at everything from supportive services to what is going to prevent these incidents from occurring in the first place,” Choi said. “And that’s the work I feel is the most inspiring. As I said before, there’s a tremendous amount of pain and hurt across all communities and COVID has exposed that disparate impact. The surge in violence has created an atmosphere of tremendous fear and so we really have to speak to that and really hold our community at this time and address that immediate harm.”