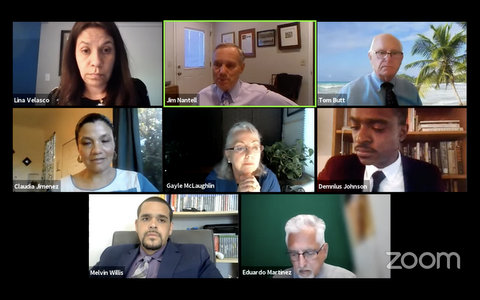 After months of debate, the Richmond City Council voted Tuesday to reduce the police budget by $3 million and use that money to fund a portion of the recommendations from the Reimagining Public Safety Task Force.

In total, $6.38 million will be given to incorporate the recommendations in the upcoming city budget. It will require the combination of police department cuts, elimination of some vehicle purchases and excess funding from this fiscal year. This reallocation will give $1.98 million to the YouthWorks program, $1.6 million to the Office of Neighborhood Safety, $1.8 million to homelessness services and $1 million to creating a non-police crisis community response team.

The motion passed 4-2-1 with Mayor Tom Butt and Council member Nate Bates voting against and Vice Mayor Demnlus Johnson abstaining. Prior to voting, city staff presented six options to fund the recommendations. Only three of the options garnered significant support from the Council and 88 public speakers at the meeting.

— Option A: $5.58 million for the recommendations, with $2.3 million coming from Police Department reductions, $1.6 million from American Rescue Plan funds and $1.3 million in excess funding.

— Option F: $6.38 million, with no money coming from the Police Department but $1.6 million in American Rescue Plan funds, $1.3 million in excess funding, $3.3 million by eliminating vehicle purchases and facilities improvement.

Council members Claudia Jimenez, Melvin Willis, Gayle McLaughlin and Eduardo Martinez advocated for option E. Martinez called it an investment in the community that would increase public safety. Willis agreed and said maintaining public safety is difficult when people “feel completely abandoned and put in the position where they have nothing else to lose.”

“Intervening in crimes before they happen, discouraging people to not pick up a gun and painting a path that is more than just the streets is equally important as chasing the bad actors,” Willis said.

Butt and Bates disagreed, pushing their support behind option F. Butt said more residents seemed to be “against defunding than for it.” He noted that the police review commission voted 5-1 not to defund the department as well as all the neighborhood councils in the city. Bates said the other council members were going against the “will of the people” and ignoring residents who are afraid of crime increasing.

“During my four decades on this council, I have never received as many emails and communications from citizens within the community, taxpayers and voters, that are totally opposed to defunding the police department,” Bates said. “And if all of you are honest, I’m sure you all received them too.”

In an online survey conducted by Richmond Pulse, 56% of the 142 Richmond residents who had responded as of Thursday afternoon said the police budget should be decreased and the money used on other community services. Roughly 29% of Richmond respondents want to see greater police presence in the city, and another 27% say it should stay at current levels. Nearly 87% of people said social workers or mental health professionals should respond to calls of someone in crisis. A slightly higher percentage said those professionals should respond without police accompaniment. Additionally, about 86% of people answering the survey who live in Richmond said they feel safe or somewhat safe in their neighborhood.

Among the 200 total respondents, 46% supported reducing police spending and using that money on community services, and nearly 90% said social workers and health professionals should respond when someone is having a mental health crisis.

The plan approved by the council will not result in layoffs but will permanently eliminate the 12 vacant positions that the police department was hoping to fill this fiscal year. Chief of Police Bisa French said the department has already been affected by staffing shortages, which she said have resulted in reductions in service. She also anticipates losing more positions because there are officers in various stages of hiring with other departments.

Johnson alone expressed support for option A, which was recommended by city staff. This approach would enable staff to ensure programs were effective and responsive to community needs without a gap in services, according to the staff report. Johnson called on everyone to come closer to the “middle majority” and adhere to both sides of this divisive issue.

“I really hoped, no I prayed, that everyone would come tonight ready to meet their fellow community members in the middle, but here we are,” Johnson said. “We must all be losers because we are looking for compromise.”