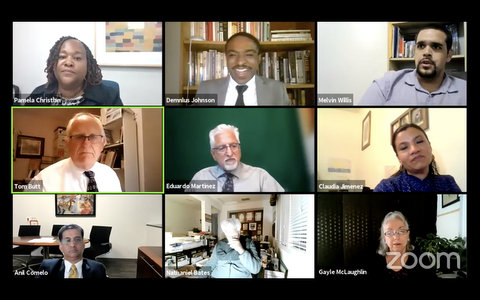 The Richmond City Council on Tuesday voted 5-2 to approve a budget for the 2021-22 fiscal year, successfully finalizing a budget that stemmed from debate over public safety funding.

Tuesday’s meeting finalized the budget with revenues and expenditures at $188.5 million and a reserve amount of $28.2 million, which equates to 15% of general fund expenditures. The city is benefiting from $4 million of the American Rescue Plan Act funds and $3 million of the excess $15.6 million from the 2020-21 fiscal year. The budget will also eliminate 12 frozen positions in the police department, add 14 new city positions and unfreeze 11 other positions.

The remaining excess funding from the previous fiscal year and an additional $4.5 million from the American Rescue Plan Act funds will go toward a multitude of measures such as task force initiatives.

“This is a budget that is going to represent the values in the community, and as we continue, we want to work on more ideas for revenue and decide how we make sure our city is better,” said council member Claudia Jimenez.

Similar to the last few months, the final budget discussion centered on public safety with some of the council citing their concerns for adding two non-sworn community officer positions to the police department. The council directed staff at a June 8 meeting to not increase police officer positions in this budget.

Jimenez motioned that the positions be moved to the task force budget for “further conversation and coordination of how we will provide these services.”

“When the discussions about implementation occur, there should be collaboration for how these positions could be part of reimagining public safety initiatives,” Jimenez said.

Police Chief Bisa French said she was “confused about the opposition of the positions” as they were created out of the reimagining public safety discussion and “to meet the service needs of the community with reduced staff.” French the community officer positions are intended to take on additional duties such as completing low-level police reports, towing vehicles, issuing parking citations and doing traffic control.

“The positions would allow us to deploy professional employees who don’t carry guns into low-risk situations as requested by the community and as directed by the council last year,” French said.

Jimenez said she was not trying to eliminate the positions, but collaboration with the task force would lessen possible overlap.

Butt cited multiple concerns with the budget, calling it “illusionary.” He questioned city staff for not conducting a five-year analysis of the budget and referenced the staff report saying, “the city continues to face a structural deficit.” He criticized City Manager Laura Snideman for “pandering to the task force” and following “her own agenda.” Butt said the city charter requires the city manager to work with the mayor to construct the budget, which he said was not done.

Lastly, Butt pointed to a 2017 L.A. Times article and a recent report from the state auditor that highlighted Richmond’s issues with pension liability. He said the budget should have included an allocation for the reduction of pension liability.

“Everyone is patting themselves on the back for defunding the police, but when you really take it apart, it’s a piece of garbage,” Butt said.

Butt and Bates also reiterated their displeasure for the reallocation of the police department budget to the task force recommendations.

Along with Jimenez, council members Eduardo Martinez and Gayle McLaughlin expressed disapproval for certain wording used in the staff’s budget report. In the report, staff wrote, “the budget also defunds the police department by $3 million.” McLaughlin said she does not believe the city “should be using the defund language” and instead call it reallocating. She also noted that this fiscal year, the police budget will still increase from $67 million to $70 million.

Butt requested the vote after accusing Snideman and Stricker of using public funding to investigate whether the city paid him or his architectural firm to design floor plans for the redevelopment of the former Richmond Intermodal Transit. If true, the action would be illegal.

Butt called the accusations false and said “no one asked him what really happened.” Instead, he claims Snideman violated the city charter by spending more than $45,000 of public funds for an investigation without City Council authorization.

“Everything about the Richmond Visitor Center project was transparent, legal, and in the city’s best interest, but the city manager and the city attorney continue to this day to double down on their poorly conceived judgment, cover up their own illegal actions and spend money on an unnecessary and illegal investigation,” Butt wrote in his June 22 e-forum.

“I have lost all trust and all faith in both the city manager and the city attorney,” Butt added.

In his e-forum Wednesday, Butt said Stricker and Snideman defended their actions “based on vague justifications including that the investigation was initiated before they took office.” He also said, that after a year and a half, the investigation has not been able to “sustain any of the complaints that are the basis of the investigation.”

Butt said his next step will be to request the district attorney investigate Snideman and Stricker.