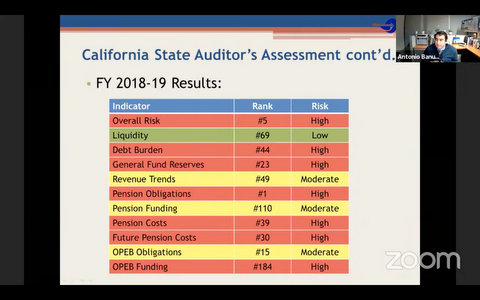 Richmond is among the most financially unhealthy California cities, according to a state analysis.

The results of the California State Auditor’s Fiscal Health Assessment were among the financial updates the Richmond City Council received Tuesday, also including reports on the city’s budget and overtime spending.

The California State Auditor published the interactive Local Government High-Risk Dashboard for fiscal year 2018-19 last month after analyzing financial information for more than 450 cities statewide. Cities were ranked from worst to best, with Richmond landing at No. 5. That means it’s one of the top cities in California facing significant fiscal challenges, according to the state auditor. Richmond’s ranking on the list has worsened over the last three fiscal years.

Other areas where Richmond ranks in the red risk tier include general fund reserves, at No. 23; future pension costs and pension costs, at 30 and 39, respectively; and debt burden, at No. 44.

The categories are weighted differently to determine the overall risk indicator, and the category that affects the scoring most is the general fund reserves, said city accounting manager Antonio Banuelos. Richmond is on track to end FY 2019-20 with $20.7 million in general fund reserves, Banuelos said, which is more than last year, but still represents only 13% of the general fund. Banuelos said the bare minimum goal is 15% percent, or close to $25 million in reserves, to change Richmond from high risk to moderate risk in this one category.

Mayor Tom Butt told the San Francisco Chronicle in November that the rating casts the city in an “undeservedly bad light.” He said it doesn’t take into account cuts the city made in June or Measure U, a change in the city’s business license tax that’s estimated to raise about $6 million more in annual revenue than the previous tax. Measure U, however, will only come into effect Jan. 1, 2022.

“For most areas of concern, the city of Richmond has much room to improve to get to the moderate rating,” Banuelos said. “It will take some time, but we’ll continue analyzing this.”

The FY 2020-21 budget currently stands at a deficit of $5.5 million, Banuelos said. About $2.5 million of the deficit is because the city budgeted for $3 million in union concessions. The deficit was reduced by $533,000 after the Richmond Police Officers Association agreed to forgo a 1% cost of living adjustment in October. The deficit increased by $2 million because of unfunded pension liabilities, and by another $1 million in September after the council voted to continue subsidizing the Richmond Housing Authority.

Richmond Finance director Belinda Brown said the city has burned through almost three-fourths of its $5.4 million overtime budget through November this year. The budget has been expended by 72%, she said, when only 42% should have been used.

Council member Eduardo Martinez said the police and fire workers take the majority of the budget. He said people are constantly asking for more fire and police staffing, but hiring them would require the city to have more money.

The next financial report is scheduled for the Jan. 26 City Council meeting.

In other news, the council voted 4-2 to approve the second reading of the Zeneca site development plan, with council member Jael Myrick absent. The council also unanimously approved a residential development project that will add 94 single-family homes on an undeveloped 25.5 acre portion of the Richmond Country Club. And, right at the end of the meeting, the council unanimously approved an investment plan for the city’s Kids First initiative.

Richmond resident Tarnel Abbott said in a public comment she had concerns about the initiative because, she said, it “kind of privatizes public service.” The initiative will be funded through an increasing percentage of the city’s general fund, starting at 1% next year and maxing out at 3%. She said she’d like to make sure the library and recreation departments don’t lose funding as a result.