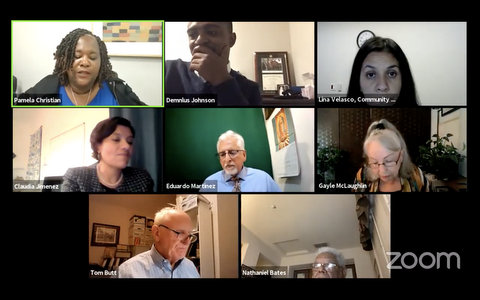 The nearly three-year extension was approved for the task force to help with the full implementation and ongoing reviews of recently passed public safety initiatives. The motion passed 5-2 with Mayor Tom Butt and Council member Nat Bates voting against.

Tuesday’s vote follows a previous three-month extension that the council approved May 18. That extension, set to end Sept. 30, allowed the task force to finalize its recommendations and continue receiving community engagement.

“If we’re pushing for this and really dedicated to public safety, then that task force that pushed these recommendations also needs to be part of the implementation stage to make sure these communities feel invested in and safe,” Willis said.

McLaughlin encouraged the council to continue the same format of replacing task force members in the cases of resignations. At the time of the task force’s creation in September 2020, Butt recommended that each council member nominate three members of the public, thus appointing 21 individuals. Since then, the council has debated whether certain task force members should have been appointed given they are not Richmond residents.

Butt and Bates pushed back on that notion and stated that the city charter only provides the mayor with the power to appoint members. City Attorney Teresa Stricker confirmed appointments are exclusively determined by the mayor. Bates raised a hypothetical question to city staff about what would occur if the mayor chose to not appoint any task force members. Neither city staff or Butt responded to the question.

McLaughlin agreed that appointments are the mayor’s prerogative but said there is precedent of changing the process to include council members.

“For certain bodies, it makes sense for a mayor to allow that process to happen and Mayor Butt allowed it to happen in 2020, and I would like to see it continue,” McLaughlin said.

Tuesday’s hearing, “by design,” repeated similar information from the first hearing, said Shalice Tilton, a senior consultant for National Demographics Corporation. The corporation was contracted to lead the mapping process.

Without any draft maps yet to present, Tilton gave a general overview of the redistricting process and continued to encourage public input on geographic and neighborhood boundaries. She anticipates drafting maps by November or December after the California Statewide Database releases official prisoner-adjusted 2020 redistricting data. The state released its census data Aug. 12.

The next two public hearings are scheduled for Jan. 18 and Feb. 1, 2022. At these hearings, draft maps will be presented to the council and discussed.

Tilton also reminded residents of the available mapping tools for drafting their own maps. Three of the four mapping tools are accessible in English and Spanish. The final mapping tool is available in six languages: English, Spanish, Portuguese, Vietnamese, Mandarin and Korean. Mapping tools vary from paper sheets and Excel-based tools to a paint brush mapping tool and a detailed, data-based online mapping resource.

The tools and other information on the redistricting can be found on the city website.