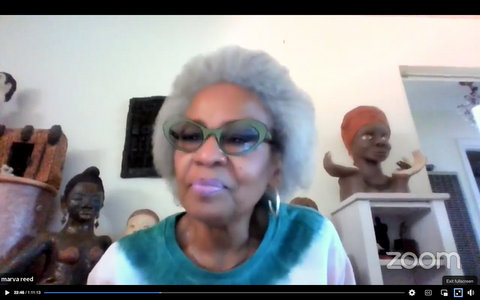 Isolation, anxiety and severe disruption of normal life patterns have been major issues during the ongoing COVID-19 pandemic, a panel of Richmond and San Pablo senior citizens said Monday during a Richmond Pulse-sponsored community conversation.

The conversation was streamed live on Facebook and moderated by Pulse Executive Editor Malcolm Marshall.

There are as many tales about how Richmond elders worked their way through the pandemic as there are senior citizens. But the panel participants agreed that isolation was a key factor during the lockdowns.

“The room kept getting smaller and smaller,” Tina Smith said of her time in an apartment she shares with her ill mother. “My mother and I usually go out. But we weren’t, or having anyone in.” She said it was very difficult to explain to other loved ones that they simply “couldn’t come over.”

Besides feeling as if the walls were closing in, Smith said when she was able to get out again, she found prices for food and staples had gone up dramatically.

“The prices were jacked,” she said. “Three times normal.”

Smith was initially hesitant to get vaccinated. But eventually her doctor convinced her to get the shot and to arrange for her mother to be vaccinated. The logistics proved to be a struggle. Information about where and when the vaccine could be gotten was complicated to sort out, she said.

For Marva Reed, her preexisting anxiety got worse because of the disruption of her normal daily routines. Reed had been very involved in the Richmond art scene and the Richmond Art Center. Her day-to-day visits to art-related places stopped, prompting her to spend hours in front of her television and on the phone with friends.

Reed commended her fellow panelist Smith for her courage through the pandemic.

“Miss Tina, I want to commend you for holding it together. I suffered too,” she said. “And I am still dealing with the depression and some anxiety.”

Reed was initially hesitant about the vaccines too. But conversations with friends and recalling childhood memories of getting the polio vaccine in a sugar cube tipped the scales toward the inoculation. She said she is now a strong advocate for vaccination.

Suzanne Gordon, a Richmond writer who specializes in health care, said the pandemic for her — and the world — has been a once in a lifetime event.

“It changed our world,” she said. “We had no experience with this.”

Active in politics and socially, the gregarious Gordon said a major change for her is that former big group gatherings at her Point Richmond home are simply not going to happen anymore. It’s too risky.

But one positive thing has been seeing her children more, she said.

She also said she is worried about the impact the anti-vaccine activists, particularly those increasingly aggressive toward people who simply wear masks, are making.

Gordon said she gives high marks to Contra Costa County public health officials for their efforts to keep people safe and to make the vaccination system as smooth as possible.

Dewanda Joseph said the most heart-wrenching impact of the pandemic was the death of a friend.

“I lost a loved one to this virus,” she said. Joseph is just coming out of her depression over his death, she said.

But Joseph’s natural inclination to help people led her to study how the pandemic was affecting the community.

“I got an opportunity to do a project about the virus and the vaccine in the African American community,” she said.

She said the entire experience taught her a valuable lesson she believes others should think about: “Even in the midst of sorrow, there are reasons to rejoice.”

This community conversation was recorded and can be viewed in its entirety on the Pulse Facebook page.