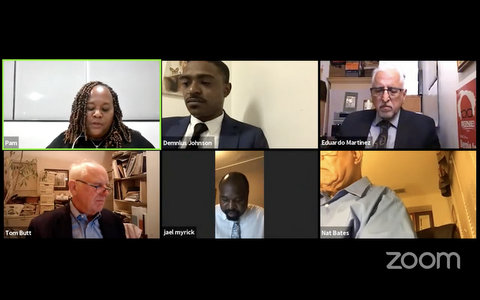 The Richmond City Council voted Tuesday to indefinitely table a controversial policy that would have required council candidates to provide proof of residency to run in city elections.

Butt, who was responsible for the item, said many people had characterized it as “discriminatory, racist, and all kinds of terrible things.” However, he said, proof of residency is commonly required by school districts, universities and a growing number of cities, such as Palm Springs and Coalinga.

Butt said the item would have no effect on the current election if it had passed. He said the intent of the policy was to end controversies about candidates not living where they say they live.

“I think the point of this is it’s not meant to hinder anyone from running for office or anyone holding office,” Butt said. “In the future, when somebody decides to run for office or if they’re already in office, it will end controversies and end conjecture that somebody doesn’t really live there because they’ll have gone through this process. It really ought to make life easier, not harder.”

Council member Jael Myrick motioned to table the item. Myrick said he wanted to say why he was tabling the item before the vote and added that the language in the item was inflammatory. Butt said there is no discussion on a motion to table.

The item was intended to help make sure City Council members reside in the districts they want to represent, according to the agenda documents. This wasn’t a problem in Richmond previously, as elections were run at-large — where candidates were determined by citywide popular vote — and any Richmond resident could run for any council seat. With the city’s new district elections, Richmond was split into several districts, with one council seat per district. Candidates must live in a district to run for its council seat.

Critics of the item have raised concerns about how it would unfairly make running for office more difficult for renters by requiring a signed affidavit from their landlord.

Council candidate Claudia Jimenez wrote on Facebook after the item was tabled that it represented a “direct attack on democracy and a direct attack on Black and Brown residents.” She alleged the item was part of a politically motivated attack against City Council candidates Melvin Willis and Najari Smith, both longtime renters in Richmond. Jimenez also said the council missed an opportunity for political education by not allowing public comments.

“We can not allow one person who seems very out of touch with Richmond residents to try to take away the rights that we and our ancestors have fought hard for,” Jimenez wrote.

In other news, the council approved a contract amendment with Steven Falk to serve as acting city manager until Nov. 7. Falk will be paid $200 an hour, up to $35,000, according to the agenda documents. Though Falk has served in the role since Oct. 7, the council needed to raise the payment limit from $10,000, the discretionary limit for City Manager Laura Snideman, who initially approved the contract.

LeShonda White, acting deputy city manager for internal services, said Snideman took an unexpected leave of absence early this month, and asked Falk to take over in her absence. Falk served as interim city manager for Richmond from August 2019 to January 2020.

Falk said the contract was created on the assumption that he would work eight hours a day for 20 days, adding up to about $32,000, and the $35,000 maximum would allow for several hours of overtime. Falk added that, so far, he’s been billing around six hours a day, and he expects his payment will come in well below the contract maximum.

Additionally, the council approved a $100,000 contract with the Contra Costa County District Attorney’s Office to continue the legal and educational services of a deputy district attorney in the Richmond Police Department. Some council members said the county, and not Richmond, should pay for the position, especially because the city is facing a $6 million budget deficit.

The duties of the position, which has existed in the department since 2008, include reviewing misdemeanor and violent crime investigations; ensuring state and federal laws are understood by officers; serving as a liaison with prosecutors, judges and other criminal justice experts; and conducting ongoing trainings on strategies for reducing gun violence and preventing crime through community engagement, according to the agenda documents.

French also said the position is beneficial to the city and needed — especially because the department has lost officers over the years and 10% of its budget in the last budget cycle. She also said the contract was initially $200,000, and the county had already reduced the contract by $100,000.

“Crime is going up, especially violent crime, and we’re expected to have the same results,” French said. “Something has to give at some point.”

Bates, a retired probation officer, said Richmond was the only city in Contra Costa paying the county for the services of the deputy DA. He said the county should pay for the position.