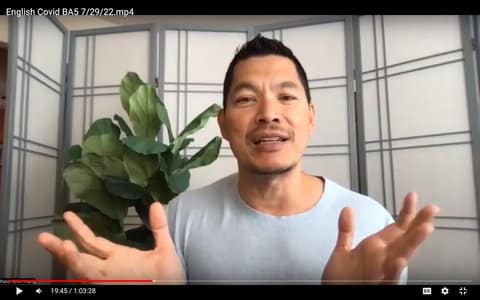 26 Aug As COVID Variants Outpace Vaccines, We Need to Keep Up

“We’re all tired,” said Dr. Peter Chin-Hong, an infectious disease specialist at UCSF. But we need to move “into the future with COVID smarts, and we can’t ignore it,” (Screenshot captured by Danielle Parenteau-Decker / Richmond Pulse)

Some people get COVID-19 and never get better. Others have seemingly gone through the pandemic without getting the disease at all. Some try to give it the out-of-sight, out-of-mind treatment. Others can’t afford to ignore it.

No matter what, the coronavirus has been an inescapable fact of life for more than two years.

When the COVID-19 vaccines became available in 2020, they brought with them hope. Though some people were apprehensive or skeptical, many believed the end of the pandemic was in sight. After months of wearing masks, staying inside and trying to keep a safe distance from others, at last there seemed to be a way to fight this sometimes deadly disease.

Then came the COVID-19 variants — one Greek letter or alphanumeric marker after another. Hope waned, replaced by apathy and resignation. Make no mistake, the vaccinations have made a difference. While they might not prevent you from catching the coronavirus, they can help prevent serious illness and death.

But the variants have outpaced the vaccines. Thousands of new cases are being reported every day, and that’s likely an undercount.

A trio of doctors tried to make sense of what’s going on during a press briefing hosted July 29 by Ethnic Media Services.

“We’re all tired … but we kind of have to keep … using our toolkits, moving into the future with COVID smarts, and we can’t ignore it,” said Dr. Peter Chin-Hong, an infectious disease specialist who works at UCSF.

“But there are a lot of silver linings, like all of the progress we’ve made in science,” he continued.

Despite that progress, many people are still getting sick.

“We have much more than meets the eye,” he said. “We get a clue from wastewater epidemiology.”

Chin-Hong said 130,000 new cases were reported daily in the U.S., but the actual number could be as high 1 million per day. There could be many people not getting tested or at-home tests that produce false negatives or positives that go unreported.

The discrepancy is a key reason why the CDC focuses less on case counts and more on hospitalization numbers.

“That’s the important public health problem,” said Dr. William Schaffner, a medical professor at Vanderbilt University who specializes in preventive medicine and infectious diseases. That’s because it represents the “people most seriously ill” and “the stress on the healthcare system.”

But why exactly are people still getting sick? The variants are a big part of that, and those are pretty much a deadly twist on survival of the fittest.

“The virus makes mistakes,” he said. “Our body cleans up all the ones it can, and what is left are the ones that are a little more difficult to knock out.”

As the vaccine has adapted, we haven’t kept up.

“Because we are still vaccinating against the 2019 virus and it is now late 2022, we have a problem,” Neuman said. “The virus is not fast, but it does move, and we have stood still.”

All the new variants and new cases have some people wondering if getting a vaccine or booster shot is even worth it at this point.

Should people wait for a so-called better vaccine — one that is specifically made to fight new variants, one that fights infection, not just illness? The panel says no.

“It’s a strategy I would not suggest,” Schaffner said.

Most of the people who have died because of the omicron variant were unvaccinated, Chin-Hong said. And those who were vaccinated tended to be older people who never got a booster shot.

When omicron first began to spread, the word was that it was a milder strain. But it’s not always so mild, particularly when people’s immune systems haven’t been equipped to fight back.

Chin-Hong gave the example of how older people in Hong Kong were affected by the supposedly mild BA.2 omicron variant.

He said things got so bad “because they had sealed off their territory to any natural infection and because they weren’t immunized, that elderly population, because of misinformation.”

For some people who get COVID, it might not seem that serious, at first. Then, it just won’t go away, or at least, that’s how it feels.

Schaffner called this long COVID, as it is known, a paradox, in which the illness has left a person’s body, but the symptoms persist.

While some people can’t shake their symptoms, others say they still have not had COVID.

Chin-Hong discussed the factors that might explain these so-called super-dodgers.

“I think the jury’s still out … several theories,” he said, including genetics. “So far, we haven’t unearthed a secret code that makes someone a super-dodger, gives them superpowers.”

Some people may have avoided the coronavirus by being more careful.

“Some people are a little bit more risk-adverse than others,” he said. They’re “less up close and personal” or still “taking more precautions when they go out.”

Within the same household, some may get sick and others stay healthy because of differences in vaccine status. Maybe only some are boosted, or they got their shots at different times. Chin-Hong said the longer it has been since someone was vaccinated, the more vulnerable they are.

But what he said is that more likely than not, many of these people were infected but just didn’t know it.

The panelists also considered “what the future will look like, and would we coexist peacefully [with COVID] instead of being all anxious,” as Chin-Hong said.

Nevertheless, he said he is “still, after all this, optimistic that we can actually drive this virus to extinction.”

In the meantime, “we’re currently trying to figure out the best way to balance a more open life with the maximum protection we can get against the virus,” Schaffner said. “Stay tuned. We’re still working on that.”

All three panelists recommended continued mask-wearing, especially if someone is high-risk or indoors with other people.

“Masks work … they’re a really good idea, and we should have mask and vaccine mandates,” Neuman said. “I know that’s not going to make everyone feel great.”

The San Francisco-based Chin-Hong said there is “very, very little public appetite even in liberal California” for restoring mask mandates.

He encouraged people to wear masks not because they have to but because it is better for them.

“Who wants to be home for five days, sort of like imprisoned with COVID anyway?” he asked.

And taking the necessary precautions is the only way to get COVID under control.

“At the end of the day … pandemics do end, no matter how scary the variant looks, and they end because the soil on which the virus is falling on becomes more and more hostile,” Chin-Hong said. And what makes the environment inhospitable to the virus is more and more people getting vaccinated and boosted.

Contra Costa Health Services has information on getting vaccinated in Contra Costa County.