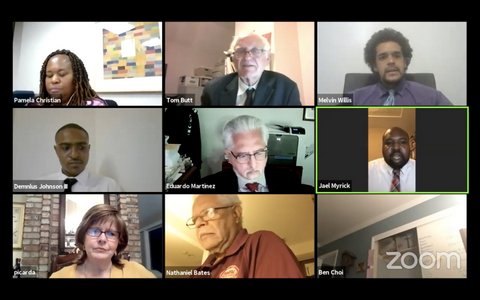 “Our values, our beliefs are reflected in our budget,” said Richmond City Council member Eduardo Martinez at the virtual meeting Tuesday.

The Richmond City Council on Tuesday selected a budget balancing plan that does not include layoffs but asks for concessions from city unions.

In addition, a motion to reduce Richmond Police Department funding by 20% and fund a community group to reenvision public safety fell 2-3-2, with council members Melvin Willis and Eduardo Martinez voting for the proposal and council members Ben Choi, Nat Bates and Mayor Tom Butt voting against.

The balancing plan, known as proposal C, was approved 4-3, with council members Willis, Martinez and Choi voting against. The plan gives city staff a direction for filling in the remainder of a $29.5 million budget deficit, which stood around $7 million at the start of the meeting, and about $5.7 million afterwards. The final budget for fiscal year 2020-21 needs to be passed by the council before the end of June.

Proposal C does not call for any city workers to be laid off but does call for roughly $6.75 million in concessions from city unions. Butt wrote in a Thursday post on his e-forum that the unions continue to push for no layoffs and no concessions, “setting the stage for a major faceoff.”

“We are not going to have a balanced budget without either union concessions or layoffs,” Butt previously told Richmond Pulse in an email.

About $5.3 million in the suggested plan would come from furloughs for both sworn and non-sworn city staff. The rest would come from getting rid of car allowances, suspending professional development for a year, and removing a 1% cost of living adjustment for the police and fire departments, among other items.

“I do want to remind folks option C has zero layoffs,” council member Jael Myrick said. “It just requires us to be successful in this bargaining process.”

Though the council had about $5.9 million in cuts left to make last week, the deficit increased because, among other reasons, the city is now paying an additional $900,000 that would have been paid by the West Contra Costa Unified School District for former school resource officers. The WCCUSD Board of Education voted last week to eliminate the SROs from its schools and invest the money saved in Black students.

The council also voted 6-1, with Butt opposing, to freeze remaining vacant positions suggested by city unions, adding up to about $1.1 million; delaying a city compensation study, saving about $200,000; and cutting about $170,000 from various departments.

Interim Police Chief Bisa French raised concerns at past meetings about freezing too many of the 15 vacant police officer positions because required patrols, with so many vacancies, result in significant overtime spending. The four school resource officers employed by Richmond, however, are now able to go on patrol instead of being stationed at schools.

Additionally, the council voted 4-2-0-1, with Butt and Martinez opposing, to increase the Office of Neighborhood Safety budget by about $286,000, which was gained from freezing a police lieutenant position. The Office of Neighborhood Safety works to prevent gun violence through reaching out to those most likely to be involved and resistant to change, according to the city website.

Myrick said he brought forward the motion to increase the agency’s budget, despite the deficit, because if the council was serious about the “defund the police” conversation, it needed to build up systems to prevent crime.

Most public comments over a roughly three hour period related to the question of defunding, with people on one side calling for a 20% cut to the police department, among other requests, and Richmond police officers defending their profession on the other.

Willis brought forward the motion to defund the police by 20%. Myrick said he wouldn’t second the motion because moving forward with the cut immediately, without thinking it through, would mean Richmond police officers would become overworked and angry and have negative interactions with the public.

“We can do this,” Myrick said. “We can actually do what the goal of the defund movement is in a responsible way, and we can actually achieve the goals, and then Richmond can once again become a city people point to as a place to do this and do it right.“

Choi said the council had a responsibility to move but with a certain amount of rigor. He said that was why they couldn’t make everyone happy. He said the council needed to focus on its duty to balance the budget before it could address the police issue.

Council member Demnlus Johnson said he agreed that policing was a large and important conversation, but he wanted to go through a process to make sure any action they take on policing is right for Richmond.

Martinez said he’s also a process person, but when the council members vote on the budget, they’ll be solidifying the city’s values for the next year. He said if they don’t get a more equitable budget, they’re saying policing is a problem but one they can wait a year on.

“Our values, our beliefs are reflected in our budget,” Martinez said. “This budget says that we as a city believe that our residents are not deserving of culture or education but instead are in need of policing.”