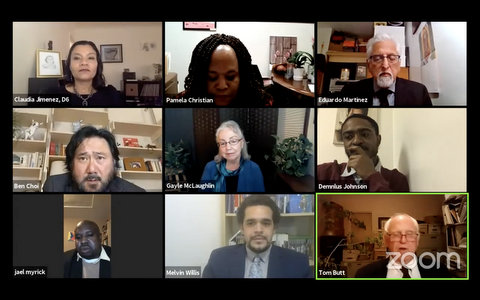 McLaughlin, who was on the Council from 2004-17, Jimenez and Willis won their seats in November in Richmond’s first district elections.

Mayor Tom Butt said he was going to miss having Choi on the council because he’s funny, smart, talented and a whiz at trivia. Butt said both Choi and Myrick played major roles in important council policy decisions. He said Myrick played an important role in negotiating a $90 million community benefits agreement with Chevron and, particularly, the $35 million that was used to fund the Richmond Promise scholarship program.

“There were three of us that really put that together, and Jael was one of them,” Butt said. “He was absolutely critical to making it happen.”

Myrick said the biggest thanks he had to give was to the community as a whole. He said it’s hard to understate the honor of being selected by a community he grew up in to serve it and make some of the toughest decisions he’d made in his life.

“My connection to this community has and always will go way beyond politics,” Myrick said.

Choi praised Myrick for always making council decisions on principle and doing the most good. He said it’d been an honor to serve, and it seemed shocking that he’d spent only one term on the council considering the large number of issues that had come before it in the last four years.

“The one thing about being on city council that is hard to relay to people is with every issue that comes before us, you look at every angle possible, including many angles you don’t want to look at, and then you look at it again,” Choi said. “It’s been, I think, the rarest kind of learning experience because it makes you push way past your comfort zone.”

After taking their oaths of office, McLaughlin, Jimenez and Willis made statements. They were also welcomed by the other council members, city manager Laura Snideman and the public.

McLaughlin is a veteran of the Richmond City Council. She was first elected as a Council member in 2004 and served as mayor from 2006 to 2014. She was reelected to the council in 2014 but vacated her seat in 2017 to run for lieutenant governor of California.

McLaughlin thanked the people who had worked on her campaign and all Richmond voters who had participated in the election. She said she looked forward to deepening her relationship with all Richmond residents.

“We are on this path together to mount our challenges and continue Richmond’s transformation,” McLaughlin said.

McLaughlin added that the council needs to work together and not engage in politics that contribute to the city’s problems. Instead, she said, the city needs to budget for its values, build healthy development that’s beneficial to Richmond and the environment, and recognize that unhoused people have the same rights to a humane and just future as anyone else.

McLaughlin said it’s the task of elected officials to ask themselves how they can facilitate and contribute to community empowerment. Change, she said, originates within the community.

“The road ahead will not be easy. Not only do we face an ongoing pandemic, but we face a major economic crisis,” McLaughlin said. “However, a quick look at history reveals that change does happen. But it comes from the bottom up.”

Willis, who was elected to the council along with Choi and Myrick in 2016, used much of his comment to thank the two departing council members. He also thanked voters and his supporters and said it was important for the council to not be distracted from their main purpose of serving the residents of Richmond.

“Though we’re enjoying this swearing-in ceremony, right now, somebody’s trying to figure out how they’re going to make it the next day or wondering if they’re even going to have a roof over their head or food on their plate,” Willis said. “I always want to do what I can to help, and if we’re not doing anything to help people out to the best of our ability with the resources we have on the council, then I always ask what are we doing here.”

Jimenez also thanked Richmond voters and volunteer workers on her campaign. She then talked about how Richmond residents are struggling during the COVID-19 pandemic, covering such topics as food insecurity, job loss and unemployment and struggling small businesses. And yet, she said, large corporations are enjoying huge profits and are receiving large amounts of financial support from the federal government.

Jimenez said Richmond residents made it clear through their votes in the November election that they want a progressive government. At the end of her comment, she repeated it in Spanish.

“Our job is to support those hardest hit by the pandemic,” Jimenez said. “We want justice for our Black and Brown brothers and sisters.”