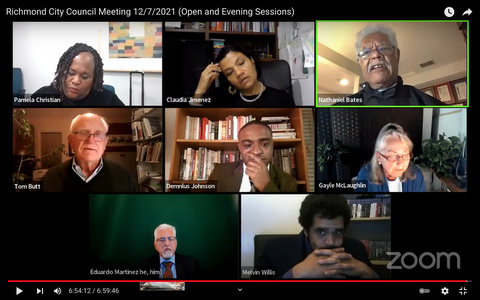 A motion by council member Gayle McLaughlin to extend a city contract for the operation of safe parking sites at Rydin Road and Castro Street was held off by a substitute motion by member Nat Bates. (Screenshot captured by Danielle Parenteau-Decker / Richmond Pulse)

By Sabrina Pascua and Danielle Parenteau-Decker

The Richmond City Council voted Dec. 7 to continue allowing people to live in their vehicles at Rydin Road and Castro Street in Richmond while it considers the future of these encampments.

Early this year, the city began to discuss establishing sites where the people it calls “unhoused vehicle dwellers” could park, sleep and receive services. As of its Feb. 2 meeting, the council was eyeing Hilltop Mall for the first such site, with the Civic Center as a backup. On Feb. 23, it reversed its decision to use the Hilltop parking lot, turning its attention to a Civic Center parking lot.

Then, the council changed its mind again.

It voted March 16 to instead begin providing services in two places where people had already been living in vehicles without official approval or support, namely the Rydin and Castro encampments. Then, the city entered into a contract with the Housing Consortium of the East Bay to operate those safe parking sites, according to a Dec. 4 post on Mayor Tom Butt’s e-forum.

More recently, council member Gayle McLaughlin added an item to the Dec. 7 agenda that would direct city staff to return to the council Dec. 21 with an amendment to the HCEB contract.

Butt said Dec. 9 on his e-forum, “a​​​​ supermajority of the City Council voted to cut off debate before it even started.” Instead, the council heard from nearly 18 public speakers, many of whom seemed to express frustration with the services provided by the housing consortium per the contract.

Some of the services the agency promised included connecting unhoused vehicle dwellers with health care, jobs and housing. However, several public speakers raised concerns over the implementation of the services.

“Unfortunately, the residents at Rydin Road have reported that none of those goals have been met, and none of the major services have even been started,” said Terri Dunn. “Now, we’re at the end of the contract and the end of the money, and there’s little to show for it.”

“It’s essential that we extend the HCEB contract because we don’t have time to do a bid or go through a process,” she said. “But with the review by the ad hoc committee each month, we will make sure that compliance occurs and we will have the option to not extend on a monthly basis. We have this encampment resolution grant funding that we expect to get. Everything has pointed toward Richmond being a really strong contender and for a significant amount of money.”

The goal of the extension is to allow additional time for unhoused vehicle dwellers to be relocated. For this to happen, McLaughlin also requested the council to approve and appropriate $50,000 that would ultimately assist in relocation efforts.

If an unhoused vehicle dweller were offered a spot in a safe parking site or a shelter bed or motel room, they would have to accept it, according to McLaughlin. The person would also be offered storage space for their vehicle.

“My motion is that we do not evict anyone, that the mayor appoint a committee that consists of those individuals that are especially involved,” Bates said. “How [are] you going to sit here on your high horse and make decisions for individuals that are out there suffering? They should have a voice as to what and how to proceed.”

Butt later appointed an ad hoc committee composed of himself, Bates and Martinez “to meet with stakeholders and recommend a path forward.” He also said in his Dec. 9 e-forum post that the committee’s first step would be a visit Dec. 13 to the Rydin Road encampment.

In other city news…

Contention between Richmond and its mayor continued as the city filed a restraining order against Butt. A Contra Costa County Superior Court judge granted the temporary order Dec. 7, ruling that Butt had posted “confidential and privileged communication” on his e-forum Nov. 5 and Nov. 16 from City Attorney Teresa Stricker, SFGATE reported Monday.

The mayor told SFGATE that the order had not yet been delivered to him but that he would not comply because, he alleged, it goes against his First Amendment rights.

The order follows the council’s 5-2 vote Nov. 23 to censure Butt, thus formally expressing its disapproval after he was accused of mishandling confidential information and possibly violating the Brown Act.

A hearing is scheduled for Dec. 29.