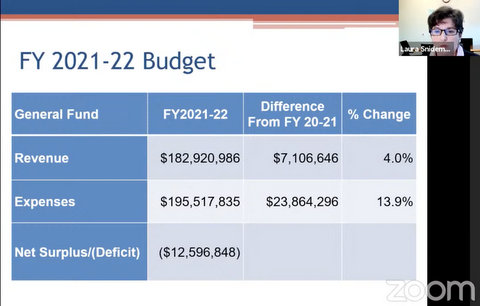 Posted at 17:40h in City Government by Danielle Parenteau-Decker 0 Comments

The Richmond City Council received a draft budget Tuesday for the 2021-22 fiscal year, which included a projected deficit of $12.6 million.

The council will have to agree on strategies to fill the gap in the coming weeks, before approving the final budget in June. This year’s budget deficit is significantly less than last year’s $27.1 million shortfall, which resulted from lost revenues during the coronavirus outbreak. City Manager Laura Snideman, who led the budget status presentation, expressed confidence in adopting a balanced budget in the given timeline.

Snideman provided an overview of city revenues and expenditures while explaining the changes since the council adopted a mid-year budget with a projected surplus of $4.1 million on February 16. Based on current city estimates, revenues are $182.9 million, and expenditures are $195.5 million which creates the $12.6 million gap. These projections represent a $7.1 million increase in revenue and a $23.9 million increase in expenditures compared with the mid-year budget.

The change in revenue mainly stems from the $6.1 million in business license revenue that’s due from the Measure U tax. In regard to the expenditure increase, Snideman said it’s primarily because of mandated changes, including overtime levels, contractually obligated promotions and hiring frozen positions.

“Much of it is really trying to get us back to the pre-pandemic service levels that we were offering,” Snideman said.

Snideman also said that much of the budget is still a work in progress given the “outstanding factors.” Along with exploring its negative fund balances and litigation costs, the city plans to explore possible revenue from the American Rescue Plan Act and Housing Authority.

Mayor Tom Butt conveyed his “disappointment” in Snideman as he said the city charter mandates the city manager and mayor work together to produce a budget for the council by the first Tuesday of May. Butt called Snideman’s presentation “not a balanced budget” but a projection of revenues and expenditures. He also said Snideman has ignored his repeated requests to be involved in the budget process. In response to Butt’s comments, Snideman agreed to meet Friday.

“Instead of having a budget we can work with, we really have nothing,” Butt said.

Council member Claudia Jimenez also asked for further information on the budget process and how city staff is using the recently passed budget guiding principles. Jimenez said that the overview of community needs is lacking in the current budget discussion and recommended the city include these economic and service demands.

“I feel like after a year of the pandemic and recession the community has major needs,” Jimenez said.

At next Tuesday’s meeting, the council will receive 24 department budget presentations that include current staffing levels and requests for additional personnel and expenses. Nearly every council meeting until June 22 will focus on the budget. On June 6, the city will host its third community budget meeting of the year.